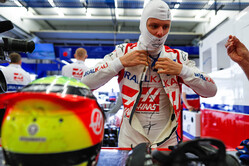 Himself the son of a world champion, Nico Rosberg warns that as Mick Schumacher prepares to follow in his legendary father's tracks the pressure will be "ten times more difficult".

More than most any other sport, over the years Formula 1 has seen sons, and even grandsons, follow in the tracks of their fathers... with varying success.

In 2016, Nico Rosberg emulated Damon Hill in winning the Formula One World Championship, like his father, and ahead of this weekend's Bahrain Grand Prix, which sees a young Mick Schumacher - son of seven-time world champion, Michael - make his debut, the German warned of the enormous pressure his countryman will be under.

It is not easy to be the "son of"," Rosberg tells F1 Insider. "With Mick it is again ten times more difficult because Michael's days weren't that long ago and he was even more successful.

"The media attention will be great," he continues, "initially probably even greater than that of Lewis Hamilton.

"I hope that Mick can put that aside and concentrate on his job ," he adds, "otherwise it takes away a lot of the fun.

"The media won't give him time," warns Rosberg, who was Michael's teammate at Mercedes for three seasons following the German's return to F1 in 2010. "It takes time and patience. After all, I had to wait seven years to win my first race and even eleven years to win the title. You have to keep that in mind if you want to rate Mick this year."

Of course, Mick's case won't be helped by the fact that he heads into the season with a car that is a carryover of the less than impressive 2020 version and which will enjoy little or no development as the American team focusses on 2022.

Having made a headline grabbing debut with Jordan - certainly as far as qualifying was concerned - by the next race Michael Schumacher was in the Benetton, which had already won one race and achieved one other podium visit in the hands of Nelson Piquet.