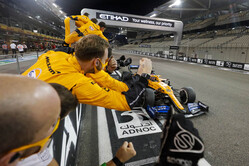 Despite claiming its best Constructor's Championship result since 2012, Andreas Seidl has warned McLaren against complacency, while admitting it will take "some years" to close the gap to the 'big two'.

Those nightmare years with Honda - second time around - a distant memory, 2020 saw McLaren take another significant step forward on its road to recovery.

In 2015 and 2017 the legendary Woking outfit had struggled to ninth, but once partnered with Renault the revival began. Sixth in 2018 was followed by 4th in 2019, while this year, its final season with Renault, saw Carlos Sainz and Lando Norris claim third in the team standings.

Leapfrogging Racing Point in the final round of the season, ahead of a much-anticipated re-partnering with Mercedes, when fans are anticipating further strong seasons like these as the Woking outfit progresses, team boss, Andreas Seidl has warned against complacency.

"We simply need time, to keep working on our plan," he said, "it's important not to get carried away with the results of this year. We need to stay realistic, despite the good result we had, and despite the great outcome with the championship, with P3, we know exactly where we are. But there is still a huge gap to the cars in front, especially to the Mercedes car."

Admitting that the deficit to the big two is "not one we can close in one year", Seidl is confident that everything is in place to keep the team moving forwards.

"The most important thing is to first of all see that the team this year under the leadership of James has produced a very competitive car, it is a step forward," he said, referring to technical director, James Key who was previously at Toro Rosso.

"It's great to see that despite the challenges of the pandemic the team kept pushing flat out, in engineering, production, to bring updates which in the end kept improving the performance of the car.

"It's great to know in Abu Dhabi we had the third fastest car but still we know what the gap to Mercedes is, that's not something we will close from one year to the next.

"We still know we have a lot of deficits in the team in terms of organisation and infrastructure, which we need to close first. But we have a clear plan, it will take time, but I'm confident if we do the right thing on the team side we can close this gap in some years."