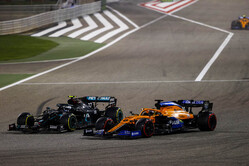 Lando Norris: "Today was tough. We had a really good first lap and got into P10 within the first few corners which was nice, but after that it was extremely difficult. We didn't have great pace and I just had to try to stay where I was, which was still good enough for a point but nothing more. A tough one and we've got some improvements to make next time, but it was a good recovery from the back of the grid."

Carlos Sainz: "Argh! This is a very bitter fourth place. The podium was very very close the whole way but unfortunately, we couldn't make it happen. The start was obviously eventful, and I managed to squeeze into P3. That first stint on the Soft was super strong. It was a close call between strategies, and we went for the two stops. After the last Safety Car, the Mercedes stuck behind Stroll was not very helpful and I think I lost one lap too many. I managed to get past him and hunt down Stroll to the end, missing the podium by a small margin. I drove my heart out there today and did everything I could to get it. It's frustrating, but at the same time we've been beaten by cars that were a bit luckier today and also a bit faster the whole weekend. So, we can't be too disappointed, and we need to keep pushing until the last chequered flag. Congratulations to Checo on his first win, I think he deserves it. On to Abu Dhabi!"

Andreas Seidl, Team Principal: "This morning we would've happily taken P4 and P10, but in the final analysis it is a disappointing outcome, with our competitors in the Constructors' Championship both scoring heavily today. Carlos drove a great race and maximised everything in our hands. Lando had a very strong opening lap and was in a position to fight for some good points, but unfortunately we couldn't extract the same performance as we could with Carlos's car due to an issue with the car. This is something we need to investigate.

"Thank you to the entire team here at the track and back home for the hard work. One more race to go, next weekend in Abu Dhabi. The team - together with our colleagues at Renault - will dig deep and give it our all to finish the season strongly."