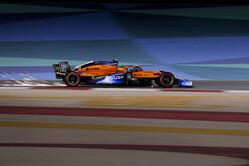 Lando Norris: "A tough quali today, because of the tyre differences and the red flag. So, it was quite a messy qualifying but the same for everyone. We did a good job with the tyres and getting the car turned around quickly. We had a slight issue with the car in the first run of Q1, but other than that my only bad run was on the very final set where I made a mistake at Turn One. It cost me probably a tenth which was a good few positions today, so I'm quite frustrated and annoyed - but I'll try to make up for it tomorrow."

Carlos Sainz: "Very disappointing day today. I was feeling comfortable with the car and managed to go through Q1 with only one set of tyres, saving two new sets of Softs for Q3. We obviously hit an issue at the start of Q2, which locked up the rear axle and that was it. It's very frustrating that I couldn't qualify higher despite having strong pace. We start on the back foot for tomorrow, so we need to decide carefully which is the best strategy, taking into account that the top-10 qualified on the Mediums. Tough one, but we won't give up and I'll give it my all in the race to recover as many positions as possible."

Andreas Seidl, Team Principal: "Finishing qualifying in P9 and P15 is a disappointing outcome. Apologies to Carlos: he's felt strong in the car all weekend and unfortunately we experienced a problem with the braking system in Q2, which denied him an opportunity to show his true performance. On Lando's side, we were able to progress to Q3 with the tyre strategy we wanted. Regrettably, in the final run we couldn't make the step that others made.

"On a happier note, the points are distributed tomorrow, and we'll be giving it our all. As was the case in Turkey, our qualifying performance will make the race very challenging - but we're expecting an interesting Bahrain Grand Prix with various different strategies in place, which should open up opportunities and allow us to recover positions."