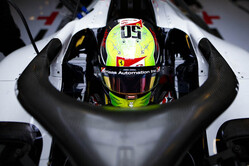 The 17th and final round of the 2020 FIA Formula 1 World Championship began with practice on Friday at Yas Marina Circuit as teams prepared for Sunday's Abu Dhabi Grand Prix.

2021 Haas F1 Team driver Mick Schumacher made his grand prix debut participating in FP1 - Kevin Magnussen stepping aside from the session to allow the newly crowned F2 Champion his opportunity behind the wheel of the VF-20.

After an install lap on the Pirelli P Zero White hard tire, Schumacher turned another seven laps on the compound for a baseline run around the 5.554-kilometer (3.451-mile), 21-turn circuit. Switching to a set of Red soft tires, Schumacher set his fastest lap of 1:41.235 - 18th quickest in the session. The German finished his outing with a high-fuel stint on the same set. Fittipaldi worked with the team on a planned 2021 development program to start his track activities. He utilized two sets of tires, the Yellow mediums and Red softs, but was never on low-fuel in the session - the Brazilian classifying 19th on the timesheet.

Kevin Magnussen returned for FP2 as the session blended from dusk to night under the floodlights at Yas Marina. Together with Fittipaldi he ran a set of Pirelli C4 prototype tires to start the evening session. Magnussen followed that up with a stint on the mediums before going for a qualifying simulation on the softs. The Dane clocked a 1:38.504 lap - good for 16th overall. Fittipaldi's second outing came on the hard rubber before he too ran the softs, setting a 1:39.027 lap to place 19th fastest. Both drivers ended the day attempting long-runs - the session compromised however by a red flag stop for the stricken Alfa Romeo of Kimi Raikkonen.

Mick Schumacher: "I would say things went pretty smoothly today in FP1. I was getting used to the car - it's such a big step from Formula 2 up into Formula 1, but I'm happy everything went well. I felt comfortable with every switch and then every switch change in the car. I started off on the hardest compound and got to do a few consecutive laps which was really good, every lap really counts as you're building up the pace and learning where you can push into each corner. It was really just a matter of time and getting the laps in. We then went onto the softer tire, which was a huge jump - the difference in compound is something you really feel strongly. It was cool, really nice. I'm really looking forward to getting back into the car on Tuesday at the test."

Pietro Fittipaldi: "In FP1 we were trying things for 2021, so it was interesting to see how the car handled. For FP2 we went back to our standard car for this weekend focusing on more performance running, as FP1 we had prioritized long runs. So that's when I got my first feel for the car this weekend. It was a bit of a crazy session. I had a yellow flag on my push lap on the softs on low fuel. I had to back off and push again. Then when we were going to start our long run, I saw the car of Kimi (Raikkonen) going on fire, so that meant we couldn't get all the laps we had wanted in. It was still a good session and I was able to understand a lot of things. We have to focus now and hopefully we can make a step forward tomorrow. Overall, I've arrived a lot more confident into this race weekend, whether I'm in traffic or running around other cars, even with my procedures - my driving in general I'm a lot more confident with. All that definitely helps."

Kevin Magnussen: "I'd say it was a decent FP2. I actually thought the car felt better than it has in recent weekends, so that was nice to see. Hopefully we can build on that and find a bit more performance on the soft tires. I think we were very strong on the mediums. We'll see if there's anything special we can do for the race on Sunday. First, we have to see how our pace is, we need to see if we're in line with the pace of Alfa Romeo and quicker than Williams. I think it's been a good day though, now we have to try and build on that."

Guenther Steiner: "It was quite an abnormal Friday for us with three different drivers - one doing his first FP1 and the other taking part in just his second grand prix. Let's start with Mick (Schumacher), he did a good job this morning for his first time in our car. I think it's fantastic to have Mick Schumacher participating in his first grand prix weekend in our car - that's great for everyone at Haas F1. He did a solid job, he did what he was supposed to do, and he kept his nose clean. I think he learned a lot over the 90-minutes. We're looking forward to Tuesday's test with him. Pietro (Fittipaldi) started his second weekend with us. He worked on some testing in FP1 for 2021, so his lap times were not of any importance to us, we were working to get data. He had a lock-up in FP2, lost a few laps, but otherwise it was a solid performance. Finally, Kevin (Magnussen) - it was just as normal. He came back and did his job; it was pretty good considering he missed out in FP1. He surprised us and put in an extra lap at the end after the checkered to make sure he got as many laps in as he could under his belt."