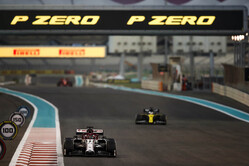 It may have come to a fiery end, as a technical issue sidelined Kimi Raikkonen with 18 minutes of FP2 left, but the final Friday of on-track action in 2020 was otherwise a regular, busy session on the tarmac of Yas Marina.

Kimi and Robert Kubica took part in a crucial FP1 session in which conditions did not replicate what qualifying and the race have in store, but which allowed us to continue assessing development parts. With Antonio Giovinazzi returning to the car for FP2, the focus switched more decisively to preparations for this weekend, with set-up work and low- and high-fuel runs.

The final part of FP2 was interrupted as Kimi's car stopped by the side of the track with a technical issue, but plenty of information had already been collected by then, allowing our engineers to get into the business of crunching data ahead of qualifying.

161 days after the first practice session of the season, in Austria, our Friday programme for 2020 comes to an end: our weekend, however, doesn't. Now is when thing really starts to count...

Kimi Raikkonen: "The car felt good, at least keeping into account the different conditions in FP1 and the part of FP2 we could complete. As always, there is a margin for improvement and that's what we are going to work on tonight. We couldn't do too many laps on high fuel given the issue we had: of course that's not ideal, but at least it happened to an engine and gearbox we were going to change in any case. It's obviously a lot of work for the guys in the garage but we should be ok for tomorrow."

Antonio Giovinazzi: "It's been a relatively straightforward Friday, although our long runs were cut short by the red flag. I jumped back in the car after sitting out of FP1 and I got up to speed quickly in the first part of the session. We have some things to improve, as always on a Friday, but if we make the step forward we expect we should be in a better position. Let's see what qualifying has in store and how we are going to do tomorrow."

Robert Kubica: "It has been an interesting day for us and a pretty positive one, at least until Kimi's technical issue later in the evening. We had quite a few things to test in FP1, mostly for evaluation and for the long-term development of the car. It was a very challenging day for the guys in the garage, with quite a few things to change in a short time, but they did great. The conditions, with a green track and a lot more warmth than we'll have in qualifying and the race, were not the easiest but I am pleased about our work. It's always a good experience to drive an F1 car, especially after getting the feeling for it back in Bahrain."