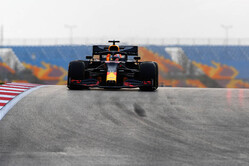 Aston Martin Red Bull Racing and Scuderia AlphaTauri rose to the challenge of practice on a track that was more of an ice rink than a race circuit, as Max led the way at the Turkish Grand Prix.

Returning to Istanbul Park for the first time since 2011, the teams were greeted with a new track surface that had also been washed prior to practice taking place. With no support racing this weekend, the grip level was spectacularly low, with Max describing it as "like ice" on his first run in FP1 and conditions barely improving during the opening session. By the end of FP1, the fastest time was some 15 seconds away from what had been predicted before the weekend despite all running taking place on slick tyres, but it was the Honda-powered drivers who dealt with the conditions best as Max and Alex registered a one-two for Red Bull, taking part in its 300th GP this weekend, ahead of Pierre in fourth and Daniil in sixth.

Toyoharu Tanabe, Technical Director, Honda Racing F1: "Formula 1's first day of action at the Istanbul Park circuit since 2011 was made difficult for all teams and drivers through a combination of factors: a new track surface that had no rubber on it and low track temperatures through both sessions, meaning there was very little grip. Along with our two teams, we therefore adapted our settings to suit the evolving track conditions. Nevertheless, across our two teams and four cars we were able to acquire plenty of useful data from the first day of running at this track with the hybrid PUs. If it's dry tomorrow, we can expect the track conditions to continue to improve and we will take that into account in our PU settings, although the forecast is for occasional rain, so we will ensure we are flexible and ready for whatever the track is like during qualifying."