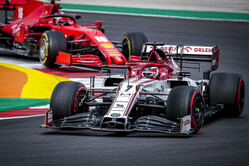 Even those Formula One seasoned veterans, who have endured many a campaign, can sometimes get hyped about something happening on track. No matter how much cynicism has crept in over the years, how inured to the ups and down of racing one has become, there are moments that still set hearts racing.

Kimi Raikkonen surging from P16 on the grid to race in sixth at the beginning of lap two provided one of those moments. As the Finn overtook Leclerc and set upon harassing Verstappen, we were left contemplating one of this season's great opening couple of laps - and dreaming of a strong result in the hills of Portimao.

Reality set in as the race progressed. A generous DRS zone made things a bit too easy for pursuing cars, and Kimi had to settle for running in ninth by the time he was called in for his first, and only, pit-stop of the day. Meanwhile, Antonio had produced another of his great starts to climb to P14, where he set off for a longer stint - the two drivers on alternating strategy, with Kimi starting on softs and Antonio on mediums.

The argy-bargy of the opening laps did eventually calm down, a race of attrition not materialising in the end, with just one car failing to make it to the chequered flag. Running solidly in P10 after everyone had stopped at least once, Kimi looked set for a points-scoring finish. Unfortunately, with 12 laps to go, Vettel's Ferrari found a way through at the end of the home straight for a DRS-assisted pass, demoting Kimi to P11 - the cruellest position - as he held off Albon's Red Bull.

Antonio, who was able to stretch his first stint longer and ultimately stopped for hard tyres, was locked in a battle with Russell as the Briton stopped, edging him at first before the Williams driver, on fresher tyres, passed him with a few laps to spare. Antonio eventually crossed the line in 15th.

Today's heroics, therefore, bear no fruit for the team. Despite the disappointment of leaving Portugal empty handed after running in such lofty places in the opening stages, we can look positively at the way we held our own against some highly-regarded rivals. It's a show of improved form - one we need to carry onwards to Imola, where we race next week, and beyond.

Frederic Vasseur, Team Principal: "Finishing just outside the points is obviously frustrating, especially after running pretty much all the race in the top ten. We took the decision to split the two cars' strategies to maximise our chances in the race and it nearly paid off. Kimi had an incredible first couple of laps and to see him overtake a Ferrari and fight with the Red Bulls is obviously a sign of the progress we have made since the start of the season. Unfortunately, our best efforts weren't enough to bring a point home but we can be confident about the final races of the season: if we continue on this path, and keep improving and optimising our package, we can consistently be in the fight for top ten finishes."

Kimi Raikkonen: "We had a very good first couple of laps, I put myself in a good position and was able to pass a lot of cars, but it doesn't really matter in the end as we got nothing out of it. We did what we could, but unfortunately there was nothing I could do to keep Vettel behind at the end. The race pace was not too bad but when you start where we started, it's not easy to make up places. The car felt good, but we still miss a little bit to finish in the points at this moment. Hopefully we can keep moving forward for next week."

Antonio Giovinazzi: "It felt like a very long race, made even harder by not having a working radio after lap one. I had no communication with the team and in the end it was just a matter of making it to the flag, which we did. The wind didn't make things easy, the gusts made the car inconsistent from corner to corner and it was difficult to get into a rhythm. Hopefully we can have a better weekend in Imola, I think the potential is there and the track should suit us a little better."