Mercedes identifies cause of first DNF of 2020 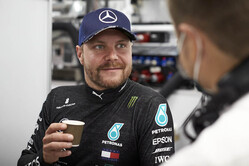 A failed component in the control electronics on Valtteri Bottas' car at the Nurburgring was the cause of Mercedes first DNF of the 2020 season.

Grinding to a halt just 18 laps into the Eifel Grand Prix, Bottas basically waved good-bye to any hope ofv challenging his teammate for the 2020 title, whilst allowing Max Verstappen to close to within 14 points.

"Seeing Lewis cross the line in Germany and take his 91st victory was a very special moment," admits Toto Wolff in his preview of this weekend's Portuguese Grand Prix.

"Valtteri's race, however, could not have gone much worse, going from pole position to a DNF and a significant points loss for him in the championship. It was undoubtedly a tough blow at this stage of the season.

"We have identified a failed electrical component in the control electronics as the cause of the problem," he reveals, "and the evidence suggests that swift action in retiring the car prevented mechanical damage to his power unit.

"A DNF is always tough for a driver, but one of Valtteri's biggest strengths is his resilience and his ability to bounce back, so I'm sure he'll be eager to hit the track in Portugal."