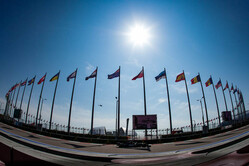 Valtteri set the pace in FP1, while Lewis struggled to get a clean lap together and finished the session in P19. Valtteri was quickest again in FP2, with Lewis ending the afternoon session in P2.

The team focused on understanding the tyres on both short and long runs, as well as temperature management on the Soft and Medium compounds.

Valtteri Bottas: There's definitely more to come but overall, it was a positive first day of running. Conditions were quite tricky out there and that's why there were so many drivers making mistakes. There were a few interruptions and that meant we were a bit limited with running, and I also had a big lock-up, which destroyed a set of tyres. Second practice was better, and we managed a lot of laps, but I still didn't quite get all the sectors right. The first two sectors felt really good, but the car was a bit too nervous in sector three. I was doing some rally-style drifting at times, which probably isn't the fastest way around, so there's still a lot of time to find. But we're in good shape and I'm sure we can make improvements ahead of tomorrow.

Lewis Hamilton: The car has been performing really well here, but it wasn't the smoothest day for me, so there's work to do tonight both on the driving side and set-up wise. The day didn't start very well, as first practice was pretty poor. I had a lock-up at Turn 2 on the Soft tyre and then when I went onto the Hard compound, I completely destroyed them, so FP1 was scrapped. The second session was a lot better, but I wasn't able to put all the sectors together so it's still a work in progress: I was a bit down in sectors one and two, but sector three was nice. The grip levels today were pretty low and that made things tricky out here, with a lot of sliding around. But I'm sure it will grip up and things will be closer tomorrow.

Andrew Shovlin: The first session was pretty messy; both drivers flat-spotted tyres and it impacted the running we could do later in the session. We managed to get some long run laps with Lewis, but there was still a vibration that was affecting pace and balance. The single lap was quite encouraging, we did the Soft tyre earlier than most and had expected our times to be eclipsed later in the session, so it was promising to see Valtteri finish the session quickest by a solid margin. The afternoon session was much better. Single lap pace was strong for both although as always, getting the tyres to last the whole lap is a bit of a challenge here. The long runs were also good, we look a bit better than we normally do on a Friday despite running a bit less wing here. There's a bit of work to do on the balance for single lap and long run, but overall, it seems like we have got off to a decent start.