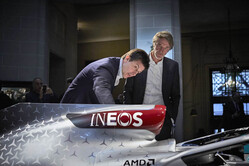 The reports follow a story in the Mail on Sunday, which quotes former team owner turned TV pundit, Eddie Jordan, as saying that Ineos would buy 70% of the team, leaving Daimler with the remaining 30%. In the process, the company would buy half of Daimler's current stake (60%), all of Wolff's (30%) and the 10% held by the estate of the late Niki Lauda.

"People pick up bits and pieces and construct a story around it," Wolff told reporters at Mugello.

"Daimler has no intent in giving up the team and Ineos has no interest in buying a majority of the team," he continued, "and I have no reason to depart from my shareholding. So plenty of things that are made up.

"The future of the team is absolutely clear," he added. "It's the Mercedes AMG Petronas F1 team and nothing is going to change that."