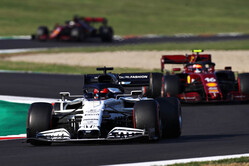 Daniil Kvyat: "It was a very difficult race today, both physically and mentally, so I think we can quite proudly say as a team we didn't make any mistakes, which is great. It was important for us to get some good points, so I'm happy with the result and I'm pleased with my driving. The team did a great job in difficult circumstances during the two red flags, and our strategy calls today were the right choices. There was a lot of mess behind us, but in front it was quite stable, so P7 was a very good result and we took some more points to close the gap in the championship."

Pierre Gasly: "It's a shame to finish the race just after the first corner. It was quite messy coming into Turn 1 with so many cars side by side. I saw some space between Kimi and Romain in Turn 2, I ended up in the middle and had nowhere to go, so we collided and that was pretty much it. I don't think there is anyone to blame, but it's a shame as I feel like we missed an opportunity for points today. We showed good pace all weekend and, even if we didn't have a great qualifying, I was confident we could recover today. Obviously, I would have liked to have been out there with the guys and fight for points, but I think we need to take the positives here because the performance so far has been good, so we need to carry this to Sochi."

Jody Egginton (Technical Director): "An eventful race! Pierre was caught up in the opening lap incident, which unfortunately put him out of the race before it had a chance to get going for him. It's a shame as, although he qualified out of position, he would have likely moved forward in the race, potentially into a points-scoring position. Daniil avoided the fuss at the start and then got his head down and settled into the race, focusing on managing his tyres and pushing when required, keeping himself in position and in contention for points all race. The team and driver navigated the two red flags well and were deservedly rewarded with some good points today."

Franz Tost (Team Principal): "It was a very exciting race with a lot of entertainment, which is what the fans like so they must be happy today. Two red flags are very rare in Formula 1 and, unfortunately, we were involved in the first of the incidents, when Pierre was caught in a sandwich between Grosjean and Raikkonen. Because of this, the car was quite heavily damaged, and he wasn't able to continue. However, Pierre was OK after the crash, and that's the most important thing. Following the victory in Monza, luck wasn't on Pierre's side this weekend in Mugello, neither in qualifying nor the race. We know how good Pierre is, and I'm convinced at the next race in Russia he will start from zero and bounce back. Daniil did a very good job today, he managed to avoid the chaos at the first start and ended the first lap in ninth position before the first red flag. He had another good start and moved up into P7, which is where he finished the race. It was a very good drive from him, showing a fantastic performance. Our original strategy for Daniil was a one-stop starting on the Prime tyre, then moving to the Option but due to the red flags, we decided to change it and sent him out on the Option tyre after each restart, which helped us improve the performance of the car. We added a few more points to our tally and we'll try to continue doing so in Russia."