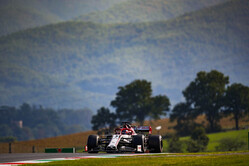 The statistics will say that today's qualifying for the Tuscany Grand Prix was the best Saturday result for the team in 2020, with Kimi Raikkonen's 13th place the highest grid placement obtained this season so far. What the dry numbers won't tell, however is how close the team went to booking its first Q3 spot of the year, with Kimi equalling Daniil Kvyat's time for P12 and finishing the second segment of qualifying just 0.332s off P10.

There are no points given on Saturday, of course. And, most importantly, there are no points given for P13: but starting from the seventh row gives us a better chance to battle for a spot in that all-important top ten when the lights go out tomorrow. In what is expected to be a tough race under the baking Tuscan sun, we will need a good start and to make the right calls to edge our rivals in what looks like a very tight pack. Doing so from six or seven places ahead of where we used to launch at the start of the season will help.

The tricky and flowing layout of the Mugello Circuit, unfortunately, claimed Antonio Giovinazzi early in the session. Antonio produced a good effort in his first run, but was caught out by one of the track's corners in his second one: on a circuit with no solution of continuity between a corner and the next, that was enough to edge him out of the top 15 by a small margin. The Apulian has produced some incredible starts in recent weeks, however, and a good launch will bring him straight in contention again.

As with everything else this weekend, much remain unknown about tomorrow's race. Tyre degradation, strategies and even the likelihood of a Safety Car - all is in the realm of the hypothetical still. It's going to be a can't-miss one, by the looks of it - and we'll be in the thick of it.

Frederic Vasseur, Team Principal: "To place a car in Q2 for the second race in a row, just 0.3s off a place in the top ten, is a good result and we can be pleased with the step forward we have made. We had our best qualifying of the year: we've made a big improvement in the last couple of months and the gap with our rivals has shrunk considerably, although we know we have to keep working hard to keep moving forward. It was a shame to lose Antonio in Q1: he was less than 0.2s from a place in the top 15, but with such a tight field, that was enough to miss out. The race tomorrow will be interesting: strategy will surely play a big role and we need to be ready to react quickly to any circumstances: a place in the points is possible if we play our cards right."

Kimi Raikkonen: "P13 is a good result given the circumstances but obviously we want a lot more. The car felt quite nice and I felt we got everything we could out of it, but it's still disappointing not to be higher up on the grid, as we were very close to the top ten. We keep pushing for a spot in Q3 and sooner or later we are going to break in. We'll find out tomorrow if we can get in the points in the race: overtaking will be difficult but all we can do is go out there and do our best."

Antonio Giovinazzi: "I'm disappointed to be out in Q1 as today we had the potential to do better. I put in a good lap in my first run, but in the second one I just didn't pull it all together. This is a track where a small mistake costs you a lot because this layout is effectively a sequence of corners: if you do a mistake, you lose momentum and your lap is ruined, and this is what happened. The race tomorrow will be tough: physically tough, with high temperatures and on a track on which overtaking is difficult. We will try our best to make up some ground."