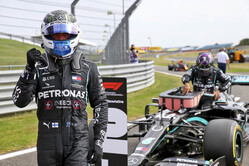 Valtteri scored the 13th pole position of his career, his second of the 2020 season and his second at Silverstone. Lewis finished a closely-fought battle for pole just 0.063s shy of his team-mate in P2.

Valtteri's pole is the tenth for the team at Silverstone

Both drivers will start the 2020 70th Anniversary Grand Prix on the Medium tyres.

Valtteri Bottas: Pole today feels really good. It's a privilege to drive this amazing car - it's so quick. I love qualifying when it's like that, it was great fun. We made some tweaks to the set-up from last weekend and for me the performance was much better today. I knew I'd have an opportunity to improve on the second run in Q3 and I pulled the sectors together, I got absolutely everything out of myself and the car. A one-stopper will be difficult with the compounds we have this weekend - but I know the team will be looking at all the options for tomorrow. I think the race pace is there and I hope I can get another good start like last weekend. I'm in a good position for the race, but we all know that the points are given on Sundays.

Lewis Hamilton: Valtteri did a fantastic job today, he put in a very strong lap when it mattered in Q3 to take pole. My first lap in Q3 was good, but the second one wasn't really all that great. I just didn't pull it together, made a couple of mistakes right at the end and ultimately you pay for that. The change in wind direction made it a bit trickier out there today, but that was the same for everyone so no excuses. It's not easy to follow on this track, but I'm hoping that the softer tyres and hot temperatures will create some opportunities tomorrow - it should be exciting. We'll work hard tonight to see where we can improve and you know I will be giving it everything to try and beat Valtteri tomorrow.

Toto Wolff: This is a very satisfying result, taking P1 and P2 with our drivers today. Valtteri did a great job to beat Lewis at his home track and it'll be exciting to see how the race pans out tomorrow. Both our drivers are hungry and will fight hard for the win. It was good to see that we maintained our pace advantage even in these hotter conditions and it will be important for us to keep that advantage tomorrow as well. The 70th anniversary Grand Prix promises to be an interesting race with a number of strategy options; we'll be starting on the mediums with Max in the row behind starting on the hard tyres and running an alternative strategy. Ultimately, tomorrow's race will not only be dictated by who can go fastest, but also who is most clever with their tyres.

Andrew Shovlin: Well done to Valtteri on another pole position! The wind has made things a bit tricky for everyone today and made the track slower overall compared to yesterday, which took a bit of adapting to in the final practice this morning. We focused on the soft tyre there and seemed to have good grip and balance on new tyres, so the changes on the car going into qualifying were fairly small. Our first laps in qualifying weren't too impressive, it seemed that the track wasn't in great shape and the wind had changed from the morning, which took a bit of getting used to. We ran again right at the end of the first session on the same used set and the pace then looked decent. From there on in it was fairly straight forward. We had wanted to start both cars on the medium tyre and had discussed this morning that we'd not move away from that even if we saw others on the hard in Q2. By the final session it was clear that both drivers were relatively evenly matched on pace; Valtteri seemed a little happier with the medium tyre, Lewis was perhaps a little better on the soft. On the final run they were never much more than a few hundredths apart, Valtteri had a better exit from turn 7 and held onto that gain for the remainder of the lap to take pole. We're looking forward to the race tomorrow, the softer compounds will create more strategy options and it's always an exciting race here where anything can happen.