Bottas talked to other teams 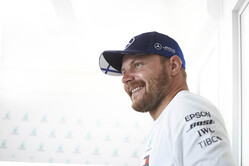 Valtteri Bottas says that he spoke to other teams before agreeing a new deal with Mercedes which keeps him at the German team for a fifth season.

While most will no doubt utter the words "yeh, right", the Finn claims he was looking around in case Mercedes opted not to retain him.

"Yes, I had talks with other teams, I can say that," the Finn tells ESPN. "Even before we had started to race, there was quite a bit of movement in terms of teams and drivers," he added, referring to the musical chairs that followed Fernando Alonso's return to Renault.

"The team made it very clear they are not going to sign anyone before we started racing because they still needed time to get back to racing, etc," he added. "From my side I thought, just in case, I wanted to look for other things in case Mercedes, for some reason, wouldn't take me.

"I don't want to go too much into detail how deep the discussions were," he continued, "but I was looking around at what would be there in case."

Fact is, realistically there is only one other team that can offer him a race winning car, and while the Finn looks fated to ride shotgun for Lewis Hamilton, at Red Bull he would perform the same role for Max Verstappen.

Asked why he accepted yet another one-year deal, he said: "If there was a long-term contract offer, I would have gone for it, for sure. But we decided again with the team to go for that, and if that is everything they can offer, then I take it.

"For me, this year, even though Lewis is leading with thirty points, there is still a chance to win the title, and next year I know that I will get the opportunity if I perform well. That's all that I need.

"Sometimes it's good to look short term and that's good for your long term," he added." If I want to win the title, this is the team to be at, so if it's one year, I take it. It's normal already, so it's fine.

"Yes, it would have been nice to get a long-term contract," he admitted, "but it's the best I can get, so I take it.