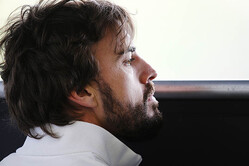 Other than a reputation for leaving teams just as they are on the verge of recovering, over the years Fernando Alonso has also gained notoriety for being toxic, in terms of creating unrest and division wherever he goes courtesy of his politicking as well publicly criticising his employers.

Consequently, while many have welcomed the two-time world champion's return to the sport, many fear that his return to Renault will end in tears.

"It's a new Fernando, who will come to race in a new Formula 1," the Frenchman tells Sky Sports F1. "It's a different Fernando that we have today.

"The sport can be at times toxic," he continued, "in particular when you know, like he knows, that he's a fantastic driver and yet you have absolutely no chance to get even close to a podium. That's tough, that's very difficult.

"I've got nothing that I want comment about as I was not part of those teams, but he's been part of teams where there was also difficulty due to the fact they were not at the competitiveness levels that they wanted or projecting.

"So I think honesty, no political games being played or possible," he added. "That will be a test for our team.

"I can tell you, there are absolutely no politics in our team. We have a very strong management group. We are on a mission and I will make sure myself that it stays like that and we don't give an opportunity to anyone to play anyone against the other. One team, one mission and two fantastic drivers.

"He's got a smart and logical approach about the team's situation and about himself," said the Frenchman. "It's very clear that Fernando has a huge motivation after this break from Formula 1 to come back to the sport, a sport that he loves and with a team that he loves before. We've got this very strong link between us and probably deserve to have another go together.

"The sport is full of comebacks," he continued, "and I hope it will be one of the positive comebacks. It has been certainly discussed on a very honest basis, and I know that there is no wrongful expectation about what we can offer next year. But we all believe that 2022 is an exciting project for the sport, for the team and for himself.

"We have to keep on doing what we have been doing recently," he added. "He's been an accurate observer of our progression, but also the changes we've done more recently and the impact it's already had on the car we've developed this winter.

"So if we do another step like this one for the next winter, and another big step like that one for 2022, I think he will have what he wants and the situation will be nowhere near what it was when he was last at McLaren."