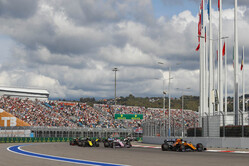 With just two weeks until the 2020 season finally gets underway, a number of communities in Beijing are introducing special measure, including lockdown, amidst fears of a second outbreak of the coronavirus.

As residents of "high risk" areas of Shanghai are forbidden from leaving the city, in New Zealand, which hasn't witnessed any instances of the virus in 24 days, two women travelling from the UK have tested positive.

With this in mind, F1 MD, Ross Brawn admits that the chances of fans attending a race any time soon, especially during the European leg of the season, are wishful thinking, as the sport has no intention of rushing into such a move.

"We won't rush that," he told an FIA eConference. "I think some of the later European races are optimistic, but I think we would rather not plan on that.

"I think when we go to the flyaway races, we can start to hope that we will have fans," he continued, "but even that's not absolutely guaranteed. I think to have the race in a safe and secure environment is critical.

"We're going around the world, we can't have a problem in one country that stops us from going to other countries. We'll progress slowly on that front.

"The fans for us are critical," he insisted. "We do want to see them as they do add a lot of atmosphere. I think we'll take that very gradually. But we don't want to jump in and then have to jump out again when we find a problem.

"The situation is different throughout the world. I think the fact that we were prepared to accept closed races in the early part of the season gave us more opportunity. That's not the ideal, it's not the ideal for any sport," he admitted, "because the fans are such a crucial part of it. But we felt going racing and broadcasting racing and engaging the fans with racing in what ways we could was still much more desirable than doing nothing.

"Approaching closed fans events gave us the bulk of the European season. Of course we can adjust that as we progress and we come to understand where we are with this pandemic.

"Our first half of the season is European-based. We're still pretty fluid on the second half. I think we're confident we're going to finish in Bahrain and Abu Dhabi, but we're filling in the spaces in-between."

As revealed earlier, just 15 journalists will be allowed to attend the opening race at the Red Bull Ring, with the same 15 subsequently covering the second race at the Austrian track and then the Hungarian Grand Prix. A different 'group' of journalists will then be granted access to the races that follow.

We understand that the BBC, Channel 4 and Reuters will not be represented in Austria, in some case because individual journalists with families did not want to take the risk of exposing them to the virus.