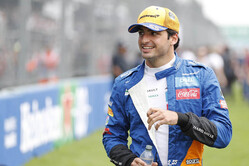 Having dominated the headlines for much of the winter, it is somewhat amusing that since the moment it was confirmed that Sebastian Vettel and Ferrari are to part company at the end of the year, Lewis Hamilton has barely been mentioned in connection with the now vacant seat at Maranello.

Even though the Briton's future, along with that of his team, team boss and teammate, remains unclear, it would appear that the choice for Ferrari comes down to Carlos Sainz or Daniel Ricciardo.

The Spaniard is riding high following a strong season in 2019, including his first F1 podium, while the Australian, though one of the highest paid drivers on the grid, didn't exactly impress last season with Renault.

Though he didn't have the best car beneath him Ricciardo rarely convinced, while his Spanish counterpart was a revelation in terms of pace and consistency.

At a time some are tipping Ricciardo to return to his old team, Red Bull, former teammate, Max Verstappen tips Sainz to get the seat at Ferrari alongside Charles Leclerc.

"The speculation was going on a bit, is he going to continue with Ferrari or not? Well today it's out. He's not," said the Dutchman in an Instagram interview, clearly relieved that for once he is not the focus of such speculation.

"I guess very soon we'll find out who the replacement is going to be," he continued, before adding: "It's definitely not me, I can tell you... I'm at Red Bull.

"I saw some questions coming along if I was going to Ferrari, but I'm not," he insisted.

"It is what it is," he added. "Somebody else gets an opportunity to drive now for Ferrari, and of course it's a great team, and I'm sure they will make the right decision about the next driver. Let's see what's going to happen there."

Of course, his insistence that it won't be Ricciardo could suggest that he is already aware of the Australian's plans for 2021.