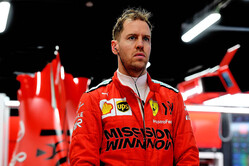 German media reports that Sebastian Vettel is to leave Ferrari at season end after contract talks break down.

Bild and Auto Motor und Sport both claim that the four-time world champion, who is in the final year of his current contract with the Maranello outfit, rejected its latest offer.

The Italian media had recently claimed that the German, who joined Ferrari in 2015, had been offered a one-year deal on a reduced salary.

The de facto team leader from the moment he joined Ferrari, all that changed last year with the arrival of Charles Leclerc - a situation which echoed Daniel Ricciardo's arrival at Red Bull in 2014 - the young Monegasque out-performing the German almost from the outset.

The situation was not helped by the fact that Vettel, whose 2018 season fell apart following a number of mistakes, continued to make the sort of errors not expected of a four-time world champion.

While Vettel has claimed he was in no rush to agree a new deal, but hoped to agree one before the season gets underway, it is understood Ferrari was keen to sort things out sooner rather than later.

Not for the first time, a world champion's dream of adding to his tally of titles with further titles with the most famous name on the grid proved elusive, and while he finished runner-up in 2017 and 2018, last year he slipped to fifth.

The German was desperate to emulate the success of his countryman and hero, Michael Schumacher, in claiming the crown with the Maranello team, but it was not to be.

The most likely candidates to join Leclerc are Daniel Ricciardo and Carlos Sainz, who are both in the final year of the contracts with Renault and McLaren respectively.

Despite the mistakes of the last two seasons, Vettel is still a driver capable of winning and will therefore be attractive to a number of teams.

Though neither Vettel or Ferrari have commented on the reports, it's understood that an official statement could be made today.