Alonso: I needed to breathe a little 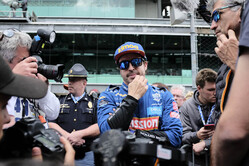 Channelling his inner Kimi, Fernando Alonso insists he knows what he's doing next year as he admits he needed to breathe after 17 seasons in F1.

Taking part in an interview on The Le Mans 24-hour Instagram account, the Spaniard said he knows "more or less" what his plans are for 2021.

Having taken part in the Dakar Rally at the start of the year, the only other date in the Spaniard's diary was the Indy 500 which has now been delayed until August.

Asked his plans for 2021, he said: "That's something I've been answering since 2018 when I did my last race in Abu Dhabi.

"We announced that I was not on the (F1) grid in 2019 because I wanted to experience something else like the WEC, Le Mans, Daytona, maybe Dakar... that happened this year.

"After 18 years of that routine and pressure on your shoulders, I needed to breathe a little out of that environment," he admitted.

Asked about a return to F1, he replied: "I said, ‘look, in the 2021 there are new rules, so I may come' as it may be more interesting and the cars will be more balanced. Maybe I'm hungry to travel again.

"It's true that F1 has delayed the rules to 2022, so that's bad news for the sport because I think they need to balance the cars and have these new rules as soon as possible," he added, "but it's a choice that's understandable because of the current situation as they couldn't develop the new cars to the full potential.

"So next year in my personal case I know more or less what I'm doing and you will know very soon. I can say no more."