F1 could lose "an awful lot of teams", warns Williams 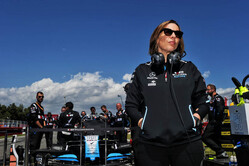 Claire Williams, boss of Britain's most successful F1 teams in terms of constructors' titles has warned that if the sport doesn't resume racing sometime soon it could lose "an awful lot of teams".

Her warning comes at a time the sport reveals that its first quarter revenue for 2020 is down 84% on the corresponding period last year, and with no racing expected until July at the earliest, the second quarter financials are going to be every bit as bleak.

Ironically, two of the sport's most successful teams, McLaren and Williams are now the most vocal in terms of their finances, desperate to go racing again whilst leading the charge to have the impending budget cap reduced to the lowest possible limit.

However, whether the budget cap is set at $145m, $100m or $45m, no racing means no income, and if the teams are not earning, what they may or may not spend in the coming seasons becomes a moot point.

"It is scary that you could not just lose one or two teams, but an awful lot of teams if you don't get back racing," said Williams, according to Reuters. "The financial model we have in our sport is that we are all so reliant upon the money we receive from the results in the Constructors' Championship."

Admitting that she has to balance "the need to go back racing in order to ensure your team's survival against the very important reality of ensuring that your people remain safe", Williams added: "For me, at the end of the day my people are always going to win out.

"I certainly hope that doesn't cost us our team, but the safety of our people, whether that be returning them to work at Grove, or asking them to travel, is going to be absolutely paramount. We will certainly not be sending people back racing until it is appropriate to do so.

"I know that the work F1 are doing," she continued, "they've been putting an awful lot of time and energy into this to see what they can do in order to take us back racing and to do that safely.

"They're going to make sure they put in every possible health and safety regulation that they need to, and make sure that we're all doing it in absolutely the right way before we actually go back to the race track."