Carey admits possibility of no races this year 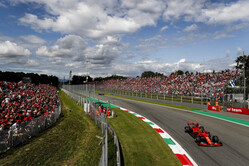 In recent weeks, despite the continued uncertainty over the coronavirus pandemic, F1 has reiterated that it is looking at a schedule of up to 18 races, kicking off in Austria in July and concluding in Abu Dhabi in December.

Though the opening events would be held behind closed doors, and some circuits could host two events, according to Chase Carey by season end the sport could be almost back to normal, with fans cheering on their heroes from the stands.

However, in a conference call moments after F1 revealed an 84% loss of revenue in the first quarter - a loss that is likely to be repeated in the second quarter - Carey admitted that there is a possibility of the season never getting off the ground.

We are increasingly confident - although there are no guarantees - that we will have a 2020 championship season," he said.

Admitting that there is "the remote possibility of no racing in 2020", he insisted that the sport's owners, Liberty Media, were prepared for such a scenario and the potential threat of little to no income had been discussed with lenders.

Looking on the bright side, Carey confirmed that he is in talks with venues not currently on the schedule with as view to them hosting events, while admitting that the season could carry over until January 2021.

"We expect the European races to be without fans," he said, adding that the sport is "making good headway on having races that can be secure and safe for everyone.

"We hope to be able to allow fans to attend in the latter part of the year," he continued, insisting that he is "increasingly positive about the number of locations that will be able and want to host a race this year.

"We have two primary challenges," he admitted, "identifying locations where we can hold a race and determining how we can transport all necessary parties and their equipment to that location for a race.

"We are in discussions with all our promoters as well some tracks that are not currently on our 2020 calendar to ensure that we explore all options.

"Right now our current targeted plan has us finishing later in December than the original plan,” he added. “But we are evaluating, and will consider, certainly finishing in January is an option, we could do that, we can do that.

“If we can we’d like to finish In December, we’d obviously have to take a fairly long break through the (Christmas) holidays, you’re not going to race in the holiday weeks."

No racing in 2020 would be the ultimate doom scenario, for while the sport has recently brought in $1.4bn from another part of the Liberty empire, with little or no income the kitty could run dry as early as this time next year, with talk of at least four teams facing financial collapse in the meantime.