Ahead of its track debut today, Red Bull has given a sneak preview of its 2020 contender, the RB16, the car with which Max Verstappen and Alex Albon will (hopefully) take the fight to Ferrari and Mercedes. 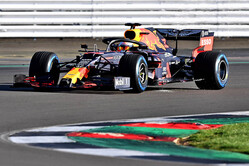 Verstappen, who claimed three wins in 2019, will drive the car at Silverstone today, with Albon having to wait until next week's test in Barcelona.