Ferrari is the first team to reveal its 2020 in the flesh, the Italian team unveiling the SF1000 at the Romolo Valli theatre in Reggio Emilia.

"It is clearly going to be an interesting year," said the company's chief executive, Louis Camilleri, ahead of the unveiling, "tough competition, a long season but it is also an important season because in parallel we have to create and develop a completely new car in line with the regulations that will govern F1 in 2021 and beyond, so the team is going to be very, very busy.

"I have every confidence in our women and men," he continued, "their creativity, their discipline and determination and, above all, the work ethic they have had before which is the hallmark of this company, one instilled upon us by our founder Enzo Ferrari.

"Mattia and his team are doing a great job and we look forward to successes going forward. We are all very conscious of the huge responsibilities that lie on our shoulders and we clearly are very focused on the ultimate goal, which is victory. I believe we have the talent and determination to meet those ambitions.

"With responsibility comes a lot of pressure," he concluded, "and we view that pressure in a positive manner because it has the effect of uniting us and also inspiring us to do ever better."

"The regulations remain stable," said Mattia Binotto, "so it is difficult to transform completely the car. "The starting point is last year's car, the SF90, but certainly we're extreme on all the concepts as much as we could. 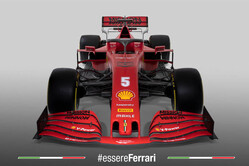 "We try to go for maximum aero performance, and try to maximise downforce level, so the entire car, the monocoque, the power unit layout, the gearbox, has been really packaged to have a narrower slim body shape. I think that is quite visible.

"We worked on all the components," he added. "The suspension has been designed to have greater flexibility when being on the race track, so we can adapt the setup to whatever suits the drivers and the circuit.

"We put a lot of effort to keep the weight down. We worked a lot on the power unit, not only for packaging, but we work on each single component to cope as well with the changing technical regulations, where the oil consumption will be reduced by fifty percent.

"It may look very similar to last year," he admitted, "but believe me it is completely different to last year. A lot of concepts are very extreme on the car."

"The back part of the car, everything sits a lot tighter," said Sebastian Vettel. "We found some clever solutions to be able to achieve that.

"I can't wait to drive it, as that's more exciting than looking at it," he laughed. "One more week to wait.

"It's fantastic," he added. "It's also a little bit more red than last year, so I think it looks great."

"This year approach is a little bit different because now I know the team," said Charles Leclerc, "I know more or less the car.

"This is an improvement from last year's car," he added, "we have been working hard together. [2020 is a big challenge and I can't wait to drive the car." 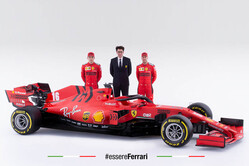 The nose is an extreme development of the SF90 and features a bigger overhang of the structural components that support the front wing.

The changes are aimed at improving aerodynamic downforce. Producing this new nose proved to be a bit of brain-teaser for the engineers and composites people as it involved an interesting challenge in terms of passing the obligatory crash test, a mission accomplished at the first attempt.

The rules regarding bargeboards are the same as for 2019, however those on the SF1000 are more complex in shape, highlighting the pursuit of increased aerodynamic efficiency from every part of the car.

The rear bodywork on the SF1000 is more tight-fitting than on the 2019 car, thanks to the work carried out on optimising the shape and layout of the components under the engine cover.

The more figure-hugging bodywork should help to increase aerodynamic downforce by cleaning up the airflow towards the rear wing.

The gearbox casing has been reduced in size to allow for this more extreme bodywork shape, while still producing the same amount of cooling as on the previous car, despite the reduction of the available space.

The dynamics and stability of the vehicle, as well as the all-important aerodynamic efficiency, were all taken into consideration when designing the front suspension layout. Particular attention was paid to the integration of the suspension mounting points and the brake ducts to maximise aero downforce while ensuring the right cooling level for the brake discs and calipers.

In order to optimise the performance level of the 2020 car, great emphasis was placed on compact packaging and weight reduction.

By lowering some elements of the cooling system, it was thus possible to further lower the car's centre of gravity which contributes to the car's overall performance.