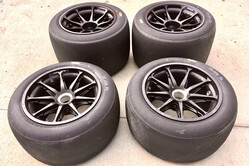 Ahead of a week which will see six of the teams reveal their 2020 contenders, Charles Leclerc got tyre testing for their 2021 counterparts underway.

Next season, as part of the massive overhaul of the sport, F1 will switch to 18-inch tyres, and in preparation for the switch Pirelli and the teams have agreed a schedule that will see all the teams on track at various times and at various locations as the Italian manufacturer tries its proposed compounds.

All ten teams will take part in 18 days of testing at eight different venues, using specially adapted mule cars for the purpose.

Charles Leclerc, who will attend the launch of the Ferrari SF1000 on Tuesday, kicked things off at Jerez yesterday, the Monegasque completing 130 laps in temperatures reaching 20 degrees.

Ferrari will be back in action at Fiorano next month, after which Renault and Mercedes share duties in Bahrain on 24 and 25 March.

Red Bull, Alfa Romeo and Renault test at Barcelona on 12-13 May, with the Austrian team completing a further two days at Paul Ricard on 26-27.

Alpha Tauri is in action at the Red Bull Ring on 7-8 July, while later that month (21-22), Racing Point, Williams and McLaren test at Silverstone.

McLaren is in action again at Paul Ricard on 8 September, with Mercedes and Ferrari sharing duties the following day.

The German team remains at Paul Ricard for 10-11 September, after which Haas enjoys two days testing at Suzuka on 13-14 October.