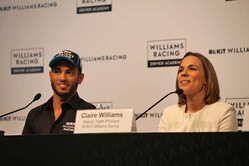 While the departure of Tata will have caused a far bigger headache for Formula One Management that it did for Mercedes and Williams, who both received less than a million a year from the technology giant as opposed to the estimated £26m FOM was receiving - the fact is that Williams has lost sponsors for the second successive season.

Having lost the likes of Martini ahead of the 2019 season, already this year Williams has lost Polish oil company PKN Orlen, and Robert Kubica, to Alfa Romeo, while Unliever has taken its brands to McLaren.

Speaking in Tel Aviv, where Roy Nissany was being revealed as the team's official test driver, Claire Williams said that the Grove outfit has the necessary funding in place for the season ahead.

"Sponsorship is hard, it isn't easy," she admitted. "We all know that and I don't think any team is finding the sponsorship market in F1 very easy.

"Our business model actually relies heavily on sponsorship," she continued, "and it's never easy. It hasn't been for the past decades, but we still managed to find a healthy racing budget with which to do what we need to do over the course of the year.

"We have that going into this year. Obviously as you all know, we sold a majority stake in Advanced Engineering, the proceeds of which come into the F1 team, in order to bolster the budget as well. So I have no concerns over the racing budget for 2020."

Of course, some might say that selling its majority stake in Advance Engineering is akin to selling the family silver, and though Nicholas Latifi and his father have brought a number of sponsors, including Sofina, Lavazza and Royal Bank of Canada on board, in a year in which teams will be spending big in anticipation for 2021, when the budget cap is finally introduced, is having a "racing budget for 2020" enough?