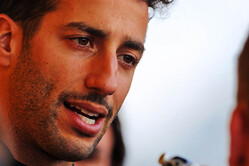 Daniel Ricciardo is to auction the race suit he wears in the Melbourne season opener in a bid to raise funds for victims of the Australian bushfires.

The fires, which have mainly affected New South Wales, and cover an area approximately the size of Scotland, have thus far claimed the lives of 25 people and are believed to have killed half a billion animals, leading to fears that the region's wildlife may never recover.

Taking to social media, Ricciardo told his followers on Instagram: "As pretty much the whole world is aware of now, Australia is suffering with some severe devastating bushfires.

"Anyone who is kind enough to donate, please do," he continued. "There's the Australian Red Cross and there's WIRES wildlife rescue.

"I'm sure there's a bunch more," he added, "but these are two I've donated to and please do the same if you can.

"And in order to encourage some people to donate, we going to... I'll get some details over the next few days... but the race suit I'll race with at this year's Australian Grand Prix. I'll sign that and we'll raffle that and all proceeds will go to those two charities as well. Details to follow.

"Thoughts with everyone who's suffered through this time... let's act upon it."