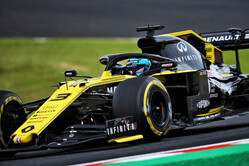 Ahead of the launch of Renault's 2019 contender, it appeared the French team was well aware of the problem it faced in the coming season.

Among the instructions given to team members in an internal document Pitpass has seen, was that they should not let themselves be drawn on the number of points the team wanted or expected to score, should not target a finishing position in either championship or even podium finishes.

Team members were also instructed not to give details of engine power, expected / planned engine evolutions over the season, technical details on the chassis (e.g. evolutions on suspension / performance gains) or aero points gained or lost since 2018, in addition to not expressing regret or other emotions on missing the partnership with Red Bull, reacting to Christian Horner comments or making comparisons to Honda.

Nine months down the line and one can appreciate the French team's need for caution. Currently fifth to McLaren in the standings, Renault is under attack from Racing Point and Toro Rosso, while its highest placed driver, Daniel Ricciardo, is currently ninth in the driver standings, just two points ahead of an in-form Sergio Perez.

While one might expect Ricciardo to be ruing his move to Renault, his former team gradually establishing itself with its new engine partner, the Australian insists that his battles in the midfield have helped improve his overall racecraft.

"It feels like a real battle," he continues. "I think most of the time the person who's best of the rest feels like they actually won something over the weekend. It's been good, it's been fun.

"The only thing that I wouldn't say sucks a little bit, but isn't as fun, is that you're more likely to get caught up in first lap incidents, being right in the middle," he adds. "That's the only thing which is a little bit, I won't say out of your control, but you're put in that position a bit more often than I was in the last few years. But it's also allowed me to work on my lap-one racecraft.

"I think my racecraft in general, and my overtaking through the race, isn't bad," says the Australian, famed for his late braking overtakes over the years, "but my lap one stuff, now starting in the midfield, there have been times where I haven't made the best decision into Turn 1, and after the fact I'm 'I could have done that better'.

"So I'm learning, being in the midfield, and that's cool. I don't want to be here forever, but it's a new skill I'm learning a bit which I didn't have to do for the last few years."

Though wins, even podiums, are currently well out of reach, the Australian insists that he is still happy if he feels he has performed at his maximum.

"It's really just about the outcome of the weekend," he says. "I'll always leave a racetrack happy and fulfilled if I know I've got everything out of it.

"I won't lie, that is heightened by taking home a trophy or a bottle of champagne," he admits, "but there's also been podiums I got where I wasn't actually completely satisfied with how I drove. So a podium isn't everything, but for sure if you've done the best you can, and you do take something home, that's better.

"The high will never be as high, and finishing fourth in Monza was a huge result, but I still wasn't standing on the podium. So I'm not going out and running around the streets naked! But as far as my personal fulfilment that's really meeting everything I need if I leave the race knowing I got everything out of it.

"It's probably just a bit of fame and TV time with a podium, but I think you know within yourself if you've got everything you can. It's enough for now, in the position I'm in."