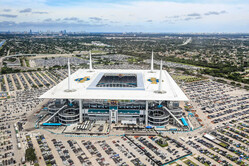 Having realised it was getting nowhere with its plans for a race in downtown Miami which would have seen cars run down Biscayne Boulevard and pass through Bayfront Park, attention switched to the Hard Rock Stadium, home to the Miami Dolphins, and which is owned by billionaire Stephen Ross, who is to co-promote the Miami event.

Though part of the proposed track layout would use Northwest 199th Street, the majority of the circuit would be located in the grounds of the stadium, which in the eyes of many brings back memories of the infamous Grands Prix held in the parking lot of Caesars Palace casino in the early '80s.

As the sport continues to make in-roads in its owner's backyard, Circuit of the Americas boss, Bobby Epstein fears that a "parking lot" event could undo the good work that has been done in recent years and damage the F1 brand in America.

"The selling point behind Miami was not the track, it was the (original) backdrop," he told ESPN. "They said we want to be in global destinations with iconic backdrops.

"It does seem very off brand of them to have a parking-lot race," he added.

"We don't worry from a ticket sales point of view," he continued. "I don't worry that that will become a fan favourite. It's not going to be a spectacular track but I do worry the impact it would have long-term in this market.

"I have never had a problem with another race in the same time zone," he insists, "and I've always welcomed the push for more U.S. races, but only if done the correct way.

"We dealt with the issues around the addition of the Mexican Grand Prix and the loss of revenue that initially gave us, but it's clear they've built something there."

Interestingly, despite F1 owners continued claims in terms of how they want to grow the sport in America, Epstein is puzzled by the fact that its bosses have never consulted him for advice.

Looking at Miami, in a week in which Roger Penske has bought the Indianapolis Motor Speedway and IndyCar, and has already expressed interest in taking F1 back to Indianapolis, Epstein believes that if Ross is genuinely keen to be involved and promote a race in America, he would be best served by looking at COTA.

"He could own this track, the greatest modern track in the world, I think he'd love it," he said. "If he's really keen on having a Formula One race, he should buy the best track. Then he'd have the best circuit in the world and no uphill battles... a built-in successful audience.

"The struggle you go through to complete something like (Miami), the hurdle is very high. It's a painful battle sometimes.

"Money would be much better spent here. This was half a billion dollars investment... you could probably buy at a great discount.

"Between what it would cost annually and the difficulties there would be to sustain a race there and the fact he has a lot deeper pockets than ours, maybe this should be his."