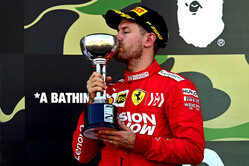 Scuderia Ferrari Mission Winnow leaves Suzuka and the Japanese Grand Prix having picked up a second place with Sebastian Vettel and a seventh with Charles Leclerc. That definitely did not live up to expectations given the front row lockout in qualifying held at 10 in the morning because of the Hagibis typhoon. Sebastian paid the price for a hesitant start, while Charles had to deal with the after-effects of a coming together with Max Verstappen at the first corner. The Dutchman spun, while the Monegasque had to pit after three laps to change his damaged front wing, which meant he had to fight back from last place.

For both Ferraris, the race got complicated right from the start. Sebastian hesitated when the lights went out and Valtteri Bottas got ahead of him and Charles got wheelspin so he was slow off the line and Verstappen came around the outside of him. Bottas led into turn 1 followed by Vettel, Leclerc, Verstappen and Lewis Hamilton. It was here that the Ferrari and Red Bull tangled and that would complicate Leclerc's race. He worked his way up from 20th to seventh before his second pit stop and was sixth before making a third visit to the pits on lap 46, when it was clear he would not lose any places. After the race, the stewards reviewed the incident between Leclerc and Verstappen and imposed a 15 second time penalty on our driver, which thus drops Charles from sixth to seventh place.

Sebastian was able to match Bottas' pace and manage Hamilton who was behind him, but as from lap 14, he began to lose ground to the leader. Two more laps and the team called him in for his first stop, fitting another set of Softs so he could keep attacking. On the following lap, Bottas pitted and got out ahead of Vettel, while Hamilton waited until lap 21 for his stop, at which point Sebastian moved back up to second. The German came in for his second stop on lap 31, his SF90 now running on Mediums as he rejoined in third place. Five laps later, Bottas made his second stop, handing the lead to Hamilton who then pitted on lap 42, rejoining right behind Vettel, but the German managed to fend him off for six laps to the chequered flag, with a skilful drive that made use of all his car's performance.

This was Scuderia Ferrari's 17th podium of the season, the eighth for Sebastian. Now the World Championship has a weekend off to charge its batteries before heading off for a double header in North America, starting with the Mexican Grand Prix on Sunday 22 October followed by the USA race on 3 November.

Sebastian Vettel: "We had a very good morning, but the afternoon was less good in terms of the result we were able to achieve as a team.

"The start wasn't good for either me or Charles and without that, we could have had both cars fighting at the front. It was difficult today and to be fair. Our rivals were simply quicker, Valtteri was just flying.

"I had a poor start, I was a bit early with the clutch initially then clutched in again and lost a bit of momentum. Usually our starts are very good but not this time. After that we were missing out a little bit in terms of speed in the race compared to our rivals. We went through the tyres more than Valtteri and Lewis. Especially at the end of the stints they were dropping off a bit more, whereas our rivals kept the pace throughout.

"Towards the end my only target was to stay ahead of Lewis. I knew that down the straights he struggled to overtake, so I just tried to have clean exits in the places where it mattered."

Charles Leclerc: "It was a tough race. I made a mistake at the start and made contact with Max (Verstappen) in turn 1, which unfortunately compromised both our races and my front wing was damaged.

"I tried to make the best of it going forward. After the first stop, when my front wing was changed, I gave it my all. I tried to make up as many positions as possible.

"Although it was quite fun to overtake other cars and fight my way up the field, P6 is not our target or a result we are satisfied with. It was a different weekend overall, and I look forward to the opportunity of bringing home better results once again at the upcoming races."

Mattia Binotto Team Principal: "Congratulations from all of us to our rivals and friends for nailing another well-deserved Constructors' Championship today. Over the course of the season, they simply did the best job and that's exactly what you need in this business.

"For our part, I'd like to highlight a positive aspect, namely the performance of our car, which was good enough to secure the front row in qualifying this morning - an exceptional result here at Suzuka. As for the race itself, we are disappointed that we did not reap the rewards of what we had sown. A shame. The start compromised the rest of the race, although it has to be said that our rival's pace was very strong and we suffered more than them with tyre degradation. We made mistakes and now we just have to look to ourselves to improve."