Verstappen hits out at Rosberg 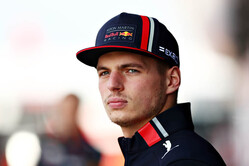 Max Verstappen has hit out at 2016 world champion, Nico Rosberg, following the German's comments on the Red Bull driver's clash with Kimi Raikkonen in Belgium.

Rosberg, who has previously described Verstappen as narcissistic, blamed the Dutchman for the clash, while also likening Sebastian Vettel's performance to that of Rubens Barrichello when teammate to Michael Schumacher.

"Back to his old self a little bit, too aggressive," said Rosberg on his YouTube vlog of Verstappen's race ending clash with Raikkonen on the first lap of last weekend's race.

"I don't understand how he stays flat-out even when the car is broken and then shunts it," he continued. "He just has balls of steel. That didn't make a lot of sense though, so that was not good from Verstappen."

"I don't really care what he says in his podcast," Verstappen told members of the Dutch media when asked about Rosberg's comments. "I think he is the new Jacques Villeneuve," he added, referring to another world champion turned pundit who regularly made controversial remarks about drivers.

"Villeneuve has changed quite a bit," added Verstappen, "but it seems that Rosberg now and again wants to give a contrary opinion. But I really don't care what he says on his channels anyway. He does it all too often. At the beginning of this year he even called me a narcissist. That is very extreme.

"Nico has never been credible," he added, "even as a driver. It's his problem. He has no charisma and can't get a job. I don't know what he wants, more viewers? Money? He should have kept driving to earn a lot more."

Ouch, as they say.