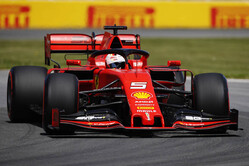 The lights go green and Verstappen is first out of the box, followed by Sainz and Raikkonen. Magnussen, Norris and Albon are among the other early risers.

At Williams, Nicholas Latifi gets another FP1 outing, the Canadian taking over Russell's car this morning.

As more drivers head out, there is a good mixture of all three tyre compounds.

Five minutes in and everyone has been out for an installation lap, all bar the Mercedes pair that is.

Following that initial burst of activity the circuit falls silent, and it is almost ten minutes before there is any further activity, Norris heading out in the McLaren which is sporting an interesting array of sensors behind the front suspension.

Shortly after, the Briton is followed by Bottas and Hamilton. Moments later, Hamilton reports "lost power" around halfway through his lap. Shortly after the engine appears to come back to life, but there is clearly an issue. Understandably, he is told to pit.

Out come the yellows as Kvyat spins at La Source, with Kubica spinning at the same spot moments later.

Stroll goes quickest with a 47.444, ahead of Bottas, Sainz, Giovinazzi, Magnussen and Gasly.. However, shortly after, Perez goes third with a 47.804.

Lots of activity in the Mercedes garage, where the throttle pedal from Hamilton's car is being examined, due to a possible sensor issue, while the rear wing is also changed.

The VSC is deployed after Stroll's car sheds its engine cover, leaving the Kemmel Straight littered with carbonfibre.

Quickest in the two final sectors, Verstappen (softs) goes quickest (45.803). Bottas, currently third, is the quickest driver on the mediums.

A lock-up at the Bus Stop for Leclerc after encountering a slow Toro Rosso on the approach.

At the point at which the extra set of tyres is handed back to Pirelli, it's: Verstappen, Ricciardo, Albon, Bottas, Leclerc, Hulkenberg, Vettel, Sainz, Stroll and Perez. Hamilton is the only driver yet to post a time.

Following another period of nothing, Sainz heads out to get proceedings underway again.

The Spaniard enjoys several laps of the majestic track to himself, improving to second with a 46.557, before he is joined by Ricciardo, Albon, Hulkenberg and Perez.

As Ricciardo retakes second with a 46.426, Hamilton is told to pit, the Briton informed that there is no telemetry.

No sooner has Bottas gone second with a 45.997, than he is demoted when Leclerc goes top, the Frenchman quickest in the first two sectors.

Moments later however, the Ferrari driver is overhauled by his teammate who posts 44.574, out-pacing Leclerc by 0.214.

As Hamilton instructs his crew to keep the tyre blankets on and retain some heat, Hulkenberg is warned that his tyre temperatures are low.

Talking of tyres, Vettel complains that his new softs have "vibrations", and not the good kind.

Over an hour into the session, Hamilton finally posts a time, a 47.066 which puts him 11th.

Stroll improves to sixth with a 46.198, as Leclerc appears to impede Grosjean.

Other than the Williams pair, the Toro Rossos, Haas' and Alfas are worryingly off the pace.

Though fifth and sixth, the Mercedes duo have posted their best times on the mediums, unlike the opposition.

Two lock-ups on the same lap for Hamilton as the world champion continues to experience problems. "Tyres are too hot," he reports.

The Mercedes pair continue on the mediums, both clearly investigating long run pace with an eye on Sunday afternoon.

As the clock counts down, all twenty drivers are on track.

The session ends, and Vettel is quickest, ahead of Leclerc, Verstappen, Albon, Bottas, Hamilton, Stroll, Ricciardo, Perez and Sainz.