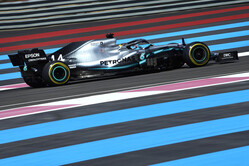 With viewing numbers seemingly in freefall, one would have expected viewing figures for a French Grand Prix widely described as one of the most boring, processional races ever, to see audience numbers drop through the floor.

However, in a major shock, the race that F1 bosses would dearly like to forget about attracted record viewing figures.

"One of the most boring I can remember being involved in," said Red Bull team boss, Christian Horner, while Sergio Perez admitted "you do have some races that are incredibly boring at the top of the field".

Widely criticised by the media, the race, which only witnessed some action on the final lap, and saw the first four drivers on the grid finish in exactly the same order, had more viewers than in 2018.

Indeed, according to the Broadcasters' Audience Research Board (BARB), the Le Castellet event was the first race this year to exceed 2018 figures having increased 19.4% to 1,707,400 which makes it the fourth most-watched race so far this year after Monaco, Spain and Azerbaijan.

However, even this sees the race trailing the Grand National (5.6 million) and the Snooker World Championships (2.1 million).

While the race - indeed all races - are shown live by Sky Sports, its data is missing from BARB's records and as a result it isn't known if Sky's audience showed a similar increase. That said, having announced, post-Melbourne, that viewing figures were up, Sky has gone remarkably quiet since.

As we await BARB's figures for Austria, the first race this year to be won by a team other than Mercedes, it's worth noting that next weekend's British Grand Prix is the only race that will be shown live by Channel 4 this season.