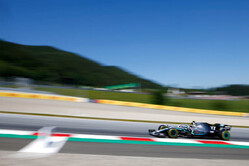 Last Sunday not only witnessed the first non-Mercedes victory of the year, but also ended the German team's hopes of equalling Mercedes record run of 11 consecutive wins - a record it has held since 1988 - along with the dream of a season clean-sweep, winning every single race.

"I was just pushing as hard as I could but just limited by temperatures," said the Briton. "We were lifting and coasting like 400+ per lap. So we were a long way down and even if I didn't have to do that we would not have the pace I think, but unfortunately that's just the way it was. Nobody was getting close to anybody."

"It was a bit more difficult than we expected," added Bottas, "especially with the overheating of the engine, so I couldn't really race properly, I had to manage all those temperatures. That's why defending was difficult and also attacking."

In the latest episode of its Pure Pitwall, trackside engineering director Andrew Shovlin reveals the cause of Mercedes Spielberg issue.

"Fundamentally the car doesn't have big enough radiators," he says, "and that's something that we were a bit optimistic with, how much we could get out of the cooling system.

"It's underdelivered to what we hoped we could achieve," he admits, "and it's meant that we are carrying this issue where in the very hot races we will be struggling to keep everything cool enough.

"You can increase the amount of cooling you get out of the car by opening up the bodywork exits and in Austria it was 35 degrees, that actually put us at the upper end of what we could achieve just by opening the car up. So, we were on limit. When you get to that point you are really limited in your options. You can start to use lift and coast, which is where the drivers get towards the end of the straight and they back off the throttle. They then brake a bit later and you have a period where the car is just coasting into the corner, the engine is not doing work and you can lose a fair bit of temperature like that.

"But, as you saw in the race, we were having to ask our drivers to increase that to around 400 metres per lap and that is why they were so compromised on performance.

"You can also turn the engine down a bit, then it will generate less heat, but you've got less power and you are slower on the straights."

"It was definitely a significant limitation in Austria," he admits. "We are working on systems, we were working on them before Austria, to try and improve this problem and we should be in a better position. But, it all really goes down to the fundamental design of the car, where in the push for very, very tight packaging, we have ended up being undercooled overall."