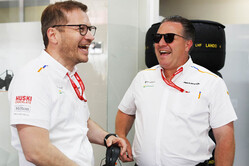 Yesterday's performance, which saw Lando Norris and Carlos Sainz claim the third row of the grid for today's French Grand Prix - ahead of Sebastian Vettel and Pierre Gasly, was further proof that the Woking outfit is gradually putting the nightmare of the 'Honda years' well and truly behind it.

However, the team, which is second only to Ferrari in terms of driver titles, and third behind the Maranello outfit and (sigh) Williams in terms of team titles, still has some way to go to even begin to recreate the glory years.

Ignoring the fact that its last title was with Lewis Hamilton in 2008, it is almost seven years since it last won a Grand Prix (Brazil 2012).

The horror of the Honda 'marriage' firmly in the past, the gradual restructuring at Woking is at last beginning to bear fruit, and speaking to reporters following his team's superb performance in qualifying, team boss, Andreas Seidl revealed that this was just the start.

"The 1.5 seconds we are missing to the top cars, or even more depending on the track, is simply aero load," he said. "This is what we are working on, day and night back home in the factory, trying to set up the car in the right window to use the downforce we developed in the wind tunnel. I think that's the main area we are working on.

"One of the biggest tasks I have at the moment from Zak and the shareholders, is to point out the key deficits and weaknesses of the infrastructure," said the former Porsche WEC boss, "the structure at home, and the structure of working out here at the track.

"One of the big deficits we have clearly is not running our own wind tunnel at Woking," her admitted, "so for almost ten years we've developed it remotely at Toyota Motorsport in Cologne. So we are very happy that the decision has been made that we install a new wind tunnel in Woking."

Revealing that the wind tunnel should be online in just two years, he said: "It is important to have this wind tunnel at home under your own control, because even when the restrictions that are coming, the more restrictions you have the more important it is to use it in the most efficient way and the most accurate way.