No further action on Verstappen clash 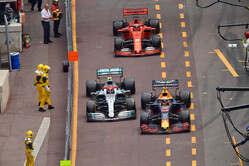 Never more than a second behind, in the closing stages, as Lewis Hamilton clearly struggled with his tyres, his cause not helped by a seemingly never-ending train of backmarkers, Max Verstappen, following a couple of false alarms, finally made his move, attempting to pass the Briton at the Nouvelle Chicane.

The two touched, causing Hamilton to miss the chicane but maintain position.

After the race, the stewards investigated the incident and having reviewed the video evidence found that Verstappen attempted to pass Hamilton on the inside at turn 10 and contact resulted.

The stewards considered that neither car was wholly or predominantly at fault for the collision and both drivers took appropriate action subsequently to mitigate the effects
of the contact. They therefore opted to take no further action.

In terms of the Dutchman's unsafe release earlier in the race, which earned him a 5s time penalty, the stewards found that the Red Bull was released when Valtteri Bottas was well within the guideboards entering the fast lane.

The stewards noted that Bottas' pit location is within Verstappen's guideboard and that the release was extremely close. However, Verstappen struck Bottas while
continuing the move towards the fast lane and subsequently pulled ahead gaining a sporting advantage following the contact.

The stewards believed that although ahead at the time the driver had the opportunity to avoid the contact contributing to the unsafe release.