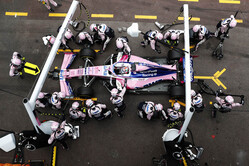 Just days after the drivers paid tribute to the many thousands of volunteers without whom F1, indeed motorsport, couldn't happen, as the FIA launched its Volunteers Weekend, Sergio Perez was involved in an incident which could have ended in tragedy.

The Mexican was one of seven drivers to pit under the Safety Car on lap 11, however as he exited the pitlane two marshals were running across the track at Ste Devote.

While one continued running across the path of the Racing Point, making it safely to the other side of the track, the other stopped dead in his tracks allowing the Mexican to pass.

It was a heart-stopping moment, missed at the time by the TV cameras.

"What was wrong with those marshals?" shouted Perez over his radio. "I nearly killed him."

Speaking after the race, he said: "I don't know if you saw but in the safety car I had a marshal running and I nearly ran over him, coming out of the pits in Turn 1.

"They were running back and I was coming out of the pits," he added. "I had to brake and was very lucky... they were lucky I avoided them.

"They're usually very good, but it's safety at the end of the day, and most important is safety for the marshals and drivers."

The Mexican subsequently tweeted video of the incident, along with the message: "After this incident, I’m just very happy with the outcome of my day. That we all can go back home safe and sound with our families. For the safety of the marshals I hope it never happens again!"

Like many of the other drivers who pitted early, Perez, who, like his teammate, had struggled all weekend, was compromised by the switch to hards and eventually finished 13th, a lap down on the leaders.