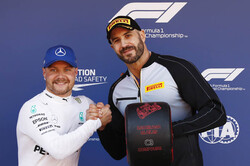 If that seamless double-stack didn't convince you that Mercedes has this season well and truly wrapped-up, then perhaps what happens over the next hour will.

Indeed, there was a little moment in FP3 earlier, that was just as chilling as that infamous double stop, Lewis Hamilton what corners he need to improve and being told by his engineer, Pete Bonnington, that there were none.

Meanwhile, having spent most of the session as a spectator after spinning off on his out-lap, on his first lap back on track again, Valtteri Bottas went quickest off all, though his time was subsequently beaten.

And despite the various updates, aero and engine-wise, the numerous bells and whistles, Ferrari remains over 0.5s off the pace.

Indeed, unless the Italian team has something pretty special in reserve, if Mercedes gets another lock-out this afternoon, we can pretty much give up and go home, for it will be a two-horse race for the title... and neither of them prancing.

And then there's Red Bull, Pierre Gasly failing to do a qualifying sim before George Russell brought the session to an early end, while teammate Max Verstappen was eclipsed by both Haas drivers.

Like Gasly, Ricciardo and Norris failed to do a qualifying sim due to the red flag, and as a result they head into Q1 pretty much blind, especially as conditions are somewhat different to yesterday.

While attention will naturally be focussed on the big guns, especially with Haas now mixing it with Red Bull, we could see some surprises in terms of who falls by the wayside in Q1 and then again in Q2.

One driver who pretty much knows that Q1 is as far as he's going to get this afternoon is George Russell, and following a change of gearbox over the break he has the added bonus of a 5-place grid penalty.

Kubica, is first out, like Russell, assured of his fate in terms of grid position before things have even begun. He is followed by Stroll.

Surprisingly, the Ferrari pair are next out.

Shortly after, Stroll posts a 19.113 as the yellows are waved after Hulkenberg goes off at T4. However, the German manages to get out of the kitty litter and return to the track, despite major damage to the front wing and nose, possibly the left-front suspension.

A spin for Russell also, the Briton lucky not to collect Hulkenberg as he makes his way back to the pits.

A 17.244 sees Verstappen go top, as Hamilton heads down the pitlane.

Despite going quickest in S1, Leclerc loses time in S2 but a strong final sector sees him improve to third with a 17.388.

With 3 minutes remaining, other than Hulkenberg and the Williams pair, the drop zone comprises the Alfa pair, with the Racing Points and Ricciardo hovering.

A 17.611 sees Norris go an amazing 6th, a very impressive lap from the youngster.

After a repair job that would challenge a Quick Fit fitter, Hulkenberg is back on track, the German posting 18.594 to go 15th. Which demotes Perez.

Ricciardo, Perez and Alfa pair are amongst those seeking, needing, to improve.

A late improvement sees Hulkenberg appear to make it by the skin of his teeth, only to be demoted when Perez improves.

The lights go green for Q2, however it is a couple of minutes before a driver emerges, it's Bottas, who is followed by his Mercedes teammate.

The Ferraris are running close together, Leclerc seemingly having slowed and fallen into the path of Vettel.

Albon goes sixth, ahead of Kvyat, with Norris subsequently splitting the pair with a 17.980.

Verstappen splits the Ferraris with a 16.726, while the Haas pair go 5th (Grosjean) and 7th.

A 17.275 sees Gasly go fifth, albeit 0.6s off his teammate's pace, while a very impressive 17.630 sees Ricciardo go tenth. That said, let's not forget he has a three-place grid penalty following his moment of silliness in Baku.

With 5 minutes remaining, and the final runs still to get underway, Albon, Perez, Norris, Kvyat and Raikkonen comprise the drop zone.

One by one the drivers head out again, including the Mercedes pair.

Among the last out is Leclerc, who is currently seventh.

Vettel and Verstappen are the only drivers opting not to run again.

Norris improves to seventh with a 17.338, while Raikkonen fails to improve on 13th.

Bottas goes quickest with a 15.924, while Grosjean improves to fifth and Ricciardo goes ninth.

Bad news for McLaren all round as Sainz also fails to make the cut.

With both Ferraris over 0.7s off the pace of the Mercedes, the big question isn't so much whether Ferrari has a new party mode on its upgraded engine, but rather a super-duper party mode.

Once again, the Silver Arrows are first out, Hamilton leading Bottas out into the Barcelona sunshine.

Hamilton sets the benchmark with a 16.040, with Bottas posting 15.406 moments later, the Finn still the only driver to break the 1:15s barrier.

Replay shows a mistake by Hamilton in T8, which possibly accounts for the 0.634s gap to his teammate. Not taking anything away from Bottas' lap.

Gasly goes fifth, ahead of Grosjean, Magnussen, Kvyat and Ricciardo, with Leclerc seemingly intending to do just one late run.

Leclerc heads out, the youngster having the track entirely to himself.