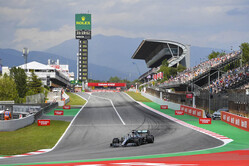 Valtteri Bottas topped the timesheets in this morning's session, but it was not plain sailing. Other than a scrappy start to his day the Finn was sidelined late in the session with a suspected oil leak.

The Ferraris of Vettel and Leclerc were second and third, both appearing to benefit from a number of updates including the Italian team's spec-2 engine.

Lewis Hamilton was fourth, 0.624s off the pace, and never seemingly at one with his car, the Briton, in particular, unhappy with his tyres.

Fifth quickest was Romain Grosjean, however his performance, or rather that of his teammate, leaves the American outfit with a bit of a dilemma, as the Frenchman was running a raft of updates aimed at curing the recent problems experienced by the team, while teammate Kevin Magnussen wasn't.

Daniel Ricciardo was eleventh quickest, the Australian the only one of the Renault-powered drivers using the upgraded unit, Carlos Sainz and Nico Hulkenberg, who won't have the upgrade until tomorrow, finishing 6th and 10th.

The Red Bull pair have yet to try the soft rubber, while, other than the fact that the Alfas were mysteriously off the pace, the other talking point was Lance Stroll's crash in the final moments of the session, after dipping a toe on the grass at T8.

Magnussen is first out, as Honda reveals that the engine has been changed on Verstappen's car following an oil leak. He was running the spec-1 unit with the intention of switching to the spec-2 unit tomorrow. Honda confirming that the change merely sees the youngster switching a session earlier than planned.

Magnussen raises the benchmark with a 19.481, the Dane of mediums, as are Kvyat and Russell, while the others are on hards.

"We expect to have Stroll out soon," says Racing Point. "He'll be running a slightly different spec, with some older parts in place while we fix those damaged in FP1. We're working hard to try and have car back to usual spec tomorrow."

"Quite a bit of understeer," complains Magnussen, who, nonetheless, improves to 18.873.

Out come the yellows as Kubica gives it a little too much welly as he enters the pitlane.

"I had cold tyres and I spin at the final corner," explains the Pole.

Quickest in the first two sectors, Vettel improves to 18.546, as former teammate Raikkonen goes sixth with a 20.221.

Hulkenberg confirms that his dash is showing incorrect information.

Nineteen minutes in and both Mercedes drivers head out. Bottas, on his first flying lap, going quickest with an 18.259 on the mediums. Hamilton, on hards, aborts his lap.

Following a very scrappy final sector, next time around Hamilton can only manage 23.295.

Third time unlucky for Hamilton, who again has a dreadfully scrappy final sector, the Briton almost losing the rear in T13. Meanwhile, Bottas consolidates his top spot with a 17.835.

However, Leclerc's best time was posted on the hards, and Hamilton is informed that it is on the straights that he's losing out to the Monegasque.

As Leclerc, now on softs, as the qualifying sims begin, goes quickest in S2, Vettel goes quickest overall with a 17.673. Leclerc subsequently stops the clock at 17.700.

An 18.153 sees Grosjean go fourth, while Magnussen goes seventh with an 18.873, the Dane having encountered traffic in S3.

"You are losing in 2, 3 and 13," Hulkenberg is told after enquiring after his teammate.

Quickest in S1 and a PB in S3, despite a poor middle sector, Leclerc goes quickest with a 17.585.

Magnussen improves to fifth, just 0.15s off his teammate's pace, thereby adding to Haas' dilemma as to which way to go in terms of the updates.

Now on the softs, Hamilton begins his qualifying sim. In S1 he posts a PB, but goes quickest overall in S2. At the line the world champion posts 17.410 to go quickest by 0.175. Moments later however, Bottas responds with a 17.284.

Hamilton is told that Leclerc did two cool down laps and subsequently improved his time.

Shortly after improving to 11th, Raikkonen has a big moment and takes trip through the gravel at T12, as countryman Bottas has a similar moment at T9, scene of Stroll's crash in FP1.

"Try to drive as on Sunday before the race," Leclerc is told. He is currently on softs which are 8 laps old, as he will no doubt be starting the race on softs Ferrari is clearly gauging how long they will last in the opening stint.

With half-an-hour remaining attention has switched to race simulation.

Understandably, having lost out to his teammate at the start in Baku, Hamilton performs a number of practice starts.

Kvyat takes a long, long trip through the gravel after going off at T1.

"Your brakes are too hot, start some lift and coast," Raikkonen is advised. The Finn is currently 11th, while teammate Giovinazzi is down in 17th.

Currently ninth, Sainz is told that his "deg is looking good".

With 15 minutes remaining, Vettel switches to mediums and Hamilton to softs, the majority of the front runners still on the red-banded rubber.

Ricciardo and Gasly almost trip up over one another after the Frenchman chose to defend his piece of tarmac despite the Renault approaching at a higher rate of knots.

As is ever the case, the Mercedes pair appear to be setting the best pace, around half-a-second ahead of Verstappen and Vettel who are marginally ahead of Leclerc.

Nonetheless, at session end, Bottas will have been the pace-setter in both sessions, with Mercedes looking to be around 0.5s quicker than its closest rival.