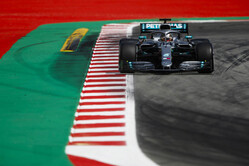 Ahead of today's sole practice session the air temperature is 21.4 degrees C, while the track temperature is 29.1 degrees. Yesterday's sunshine has given way to overcast skies. Indeed, there is a 20% chance of rain.

Though Ferrari has brought its spec-2 engine here, along with the aero upgrades introduced in Baku, on the evidence thus far it appears the Italian team still has much work to do.

While Valtteri Bottas quickest in both sessions - largely thanks to having Lewis Hamilton's former engineer, according to the Briton - in the qualifying sims the Ferraris were 0.3s off the pace and around 0.5s off the pace on the long runs.

Hamilton never seemed at ease with his car, while, following a shaky start to the day, teammate Bottas appeared to be taking up where he left off in Baku.

Splitting the Red Bulls, Romain Grosjean headed the 'best of the rest' but it is the performance of his teammate that left the American team with a dilemma. While Grosjean had the various updates, Magnussen didn't yet was only 0.202s off his teammate's pace.

Home boy Sainz looked strong, as did the McLaren duo, while Perez, the Alfas and Renault struggled.

A crash for Stroll in the final moments of FP1 not only sidelined the Racing Point driver at the start of the second session, but he also had to run a number of older spec components as the team a waited on spares to be flown of from its UK HQ.

With an eye on the sky, as soon as the lights go green there are drivers on track, Norris leading the way, ahead of Sainz, Magnussen, Albon and Raikkonen.

Verstappen is among the early risers, while Kubica is the first driver to post a time (28.795).

As Kubica improves to 26.868, Leclerc begins a flying lap on softs, the Ferrari driver going quickest in the opening sector. Just behind is teammate Vettel who is also on a hot lap.

Leclerc posts 19.334, with Vettel posting 18.925 moments later. That said, the Ferrari are on softs while everyone else is either on hards or mediums.

A brief spin for Vettel at the final chicane, the German heading straight back to the pits as Leclerc improves to 18.321.

18 minutes in and the Mercedes duo finally head out.

Albon splits the Renaults with a 19.253, as Kvyat goes sixth, on softs, ahead of Sainz and Russell.

Out come the yellows at Bottas spins and is stuck in the gravel at T5 on his out lap. The Finn is on mediums.

The session is red flagged as the Mercedes is removed from the gravel. In the garage, Toto Wolff does not look impressed.

The session resumes shortly after and the Alfa duo are the first to head out, along with Norris, Magnussen and Hamilton.

Raikkonen goes third with a 19.200, but is almost instantly demoted when Hamilton stops the clock at 18.371, like the Finn he is on the mediums.

Worth noting that Hamilton and Verstappen are on the mediums, as are Raikkonen and Ricciardo, indeed, the Briton goes quickest with a 17.655, 0.600s quicker than Vettel on those yellow-banded tyres.

With 25 minutes remaining, Bottas car arrives back in the pitlane, as Hamilton is told that the only corner he's losing out in to Vettel is T4... which means that the German is losing out in 1, 2, 3, 4, 5...

As Hulkenberg expresses concern at his tyres, it's clear that thing are a little different to yesterday with a number of teams having made progress and others fallen back.

On the mediums, Magnussen posts 18.761 to go sixth, just behind Gasly who has posted 18.693 also on the yellow-banded rubber.

On the softs, Albon posts 18.603 to go an impressive fourth. Indeed, fourth to seventeenth are currently covered by just under a second.

With 16 minutes remaining, Bottas is back on track, his W10 clearly none the worse for its off. Following an install lap he pits and goes straight on to the softs, heading out again just ahead of Vettel as the qualifying sims get underway.

As Bottas posts a PB in S1, Leclerc goes quickest in the same sector.

Despite losing pace behind Vettel, who lost pace behind Hamilton, Bottas posts 17.921 to go quickest. Moments later however, Leclerc bangs in a 17.099.

A very impressive time from Bottas, considering that this was his first lap, and he was in traffic in S3. Ominous even.

A 17.192 sees Grosjean go fourth, ahead of Bottas and Magnussen.

Both Racing Points over 2.7s off the pace.

Bottas improvers to third with a 17.123, while Verstappen goes seventh with a 17.558, despite almost tripping over a slow Stroll in the final chicane. Moments later he repays the compliment.

"Which areas do I need to improve," asks Hamilton. "Not many Lewis," comes the reply.

The session is red flagged when Russell goes off and backwards into the barriers at T4.

Asked if he is OK, the Briton replies: "Yeh, all good, just lost it from nowhere."

Just prior to that, both Racing Point drivers had improved to 13th (Perez) and 15th.

The session will not be re-started, which is very bad news for Norris, Gasly and Ricciardo, none of whom got to do a qualifying sim.