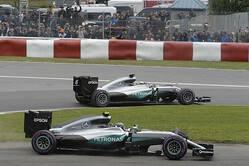 Though Mercedes never quite resorted to the cringe-worthy photo-ops of Red Bull during the infamous Vettel/Webber feud, The German team did attempt to play down the outright hostility between Lewis Hamilton and Nico Rosberg as it peaked in 2016.

With Valtteri Bottas 2.0 now appearing to ramp up his title challenge, last weekend's win giving him back the championship lead, Toto Wolff insists there will be no repeats of 2016.

"You have two drivers that have the ambition and the ability to win a championship," said the Austrian. "It's up to us together with them to be very aware of that situation and remember that very quickly Vettel or Leclerc could be back into the game, and that we mustn't be carried away with the four first results, there are 21 races to do.

"It reminds me a little bit of the situation, when Hamilton and Rosberg fought almost exclusively for the title," he admitted. "Definitely the relationship matters in order to avoid what we went through between Nico and Lewis."

"I think we are lucky that they have a very good relationship," he said of Hamilton and Bottas, who replaced Rosberg following the German's shock decision to retire days after claiming the crown. "They get on with each other.

"There are not a lot of games in the background," he added, referring to the mindgames that played out during the 'Rosberg era', "and I am very happy about that. But you have to be conscious, we have already seen a relationship deteriorate.

"Both of the drivers have an ambition to win the championship. We want them to be feisty - is that how you say it? - in the car, lions in the car, so you can't expect the behaviour of a sheep. But equally the respect needs to be there.

"We are very strong as a team and we wouldn't allow a relationship between drivers to deteriorate to a point that it has a negative effect on the team if that would ever be the case. after Nico and Lewis, we will ensure we would issue yellow and red cards. But we are far... we are not there."