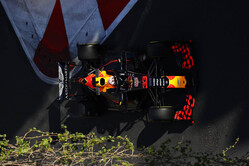 Max Verstappen: "We were positively surprised that we were so competitive in qualifying and the second row of the grid is not bad. Everything was going quite smoothly, but in Q3 we were running a different strategy as I only had one set of tyres so I was on my own. Around this track it is very painful to be on your own and you of course lose lap time to others who have a tow. Even compared to my own lap in Q2 I was losing around two and a half tenths on the main straight. You can also gain a tenth or two on the other straights having a car six or seven seconds ahead as you get sucked in and these cars have so much drag. I pushed everything I could out of my final lap and it was pretty good. I think we could have fought for pole if we were in that train of cars, but at least we know the car is working well. It's always a crazy one here and for sure the race won't be won at Turn 1. It's all pretty close and from fourth we can still fight for the race."

Pierre Gasly: "It was nice to end Q1 in P1 but knowing we're starting from the pit lane tomorrow, the most important thing was just to get a feel of the car on low fuel. It felt really good and it's probably the first time this year I've felt that good in the car, so I'm really happy. I felt confident and I'm always working and trying to adapt myself, and it's working step by step. I think we're going in the right direction and overall it was a positive qualifying session. We didn't expect that kind of pace because we didn't turn the power unit up, we went into race mode to save some engine mileage and in the end the performance was good. I think we have a good car here and I was hoping Max would get a good result in Q3. This race track is just insane with all the things that can happen so I will race flat out until the last lap. We have a car good enough to recover and score good points tomorrow, so I will push for it."

Christian Horner, Team Principal: "It was an interesting qualifying today after several red flags and Pierre did a very good job to go fastest in Q1. Max unfortunately flat spotted a tyre so needed to run again in Q1, which reduced the number of tyres available to him later in qualifying, but nonetheless we finished Q1 first and fourth. In Q2, we elected not to run Pierre as he will start tomorrow's race from the pit lane due to his weighbridge penalty, but Max was able to go quickest during the session. After the delay following Leclerc's incident, Q3 finally got underway and with one set of tyres available, the best approach was quick-slow-quick which put Max out of sync with the drivers that had two sets remaining. Whilst he had the benefit of having a clear lap, he unfortunately didn't have a tow as it would have been impossible to synchronise the different run strategies from the other teams. Overall, it was a strong qualifying with Max starting on the second row and Pierre's time in Q1 would have put him sixth on the grid. A really encouraging display from Pierre and we now look forward to tomorrow's race."