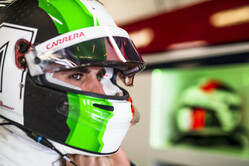 Though we are just three races into the season, it's fair to say that a number of drivers, for various reasons, haven't exactly set the world alight with their performances.

While Robert Kubica is clearly compromised by the equipment at his disposal, many feel that Antonio Giovinazzi is proving to be one of the big disappointments.

Veteran teammate Kimi Raikkonen was, in many ways, on a hiding to nothing, if regularly beaten by Giovinazzi it was down to his age, while if he beat the Italian it was due to his experience.

Three races in and Raikkonen is one of six drivers to have scored points in every race, while making it into Q3 on two occasions.

Giovinazzi, on the other hand, has yet to open his points account or make it beyond Q2.

However, team boss Frederic Vasseur is quick to defend the young Italian, insisting that his issues are "down to the team".

"I normally don't spend much time in over analysing previous races," says the Frenchman, "I look forward and work hard on how we can come back even stronger, but after three races it makes sense to reflect on our performance so far.

"We've scored points, which is great," he continues, "the car showed great potential, but at the same time we faced some technical issues and tricky situations.

"Kimi is doing a great job, his feedback to engineers is as precise as it can be and as soon as he sits in the car he gets the job done.

"Antonio so far couldn't show his real potential, but that's completely down to the team," he adds. "Some technical issues and therefore missed track time meant that he could never get comfortable and get the best out of the car, but especially in Australia in Q1 he showed how fast he is.

"Everyone just needs to be a bit patient and I'm sure he'll come around."