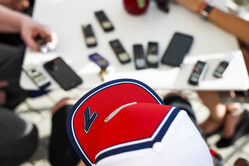 Qualifying at the 1000th race weekend didn't go to plan, so here is something from race number 792 to think back to and make us feel better today.

In 2007, Robert Kubica miraculously escaped one of the worst crashes in Formula One with nothing more than a sprained ankle. A year later, in 2008, he came back to secure BMW Sauber's first and only win in F1. "When I got in the car, put my visor down and hit the track for the first time on Friday, I didn't think about the crash. I had no thoughts about it. I had a job to do."

And boy, did he do a good job.

On the podium he secured another milestone: he was so excited that a record-breaking heartrate of over 200 was measured on him, one never reached before or after in any other race situation in Sauber's history. Maybe he loved seeing dozens of Swiss flags waved by the Sauber team members, much to the annoyance of BMW, who forgot to bring German flags with them. As a consolation, the German national anthem was played, but everyone remembers a red and white sea of Swiss flags beneath the podium.

Kimi Raikkonen: "I would say that we had a few pretty good runs in qualifying. The feeling in the last one was more like it should be. I was out on the back straight alone at one point and didn't get enough speed. That's how it goes sometimes. We will find out tomorrow what we can achieve in the race."

Antonio Giovinazzi: "Not the luckiest weekend so far for me. We had an issue during qualifying today which we are still looking in to. I had to return to the garage and was not able to go back out to set a lap time. A pity, but at least this track offers good opportunities for overtaking, so I will head into the race from the back row tomorrow with the target to work my way forward as much as possible."