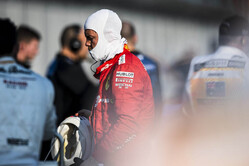 Lewis Hamilton has leapt to the defence of Sebastian Vettel following his latest error.

As the pair battled on Sunday, the German appeared to push too hard and lost the rear of his SF90, destroying his tyres in the process and thereby causing the car to oscillate violently which in turn caused his front wing to drop off. This, and the resultant pit stop, cost him time and positions which otherwise might have seen him finish second or even win Sunday's race following his teammate's engine issue.

Vettel was quick to take responsibility for the spin, though he denied it was down to pressure.

"To be honest, I don't think it has anything to do with pressure," he said after the race. "Obviously, when I was fighting with Lewis, the target was to stay ahead and that was the ambition.

"I got surprised when I lost the rear that suddenly," he admitted, "and then when I was in the spin it was already too late. I had a look at it again, certainly it was my mistake and I need to digest that our race could have been a bit better without that spin at that time, but nevertheless it was difficult race and there is plenty of homework on my side this weekend not having the feel for the car, especially yesterday and today, so we need to have a good look."

Pressure or not, it was the latest in a series of mistakes, many of them totally unforced, such as in Germany last year, which have left fans and the Italian media unhappy and frustrated.

"It's not that it plays on your mind, it happens to all of us," said Hamilton in his rival's defence. "Just because you're a four-time champion doesn't mean you're not going to have off-weekends.

"It's more cumulative," he continued. "If you look at Vettel's career he's had stunning performances that far more outweigh the weaker races, and when he's spun for example, they are minuscule on the status that he's accumulated and created.

"There are always times where you happen to just not get the right car set-up," he added. "You guys don't get to see all the little things that we're doing, and it just doesn't happen to work that weekend. And the differences are so small, and yet they look so big."