Vettel: We need to wait and see 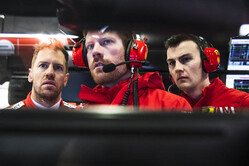 Since Melbourne, it's fair to say that one team, more than any other, has been burning the midnight oil as it sought answers.

Out-paced in qualifying and again in the race, having looked so strong in pre-season testing, when it really, really mattered Ferrari was nowhere to be seen.

"As a team, we will have to ensure that we have understood and rectified the areas where we were weak in Australia, which therefore meant we were unable to fully exploit our car's potential," said team boss Mattia Binotto earlier this week. "In Bahrain, we expect to see the effect of the corrections we have made, although we are well aware that our competitors will once again be very strong."

Still unable to explain exactly where it all went wrong, Sebastian Vettel admits that the last two weeks have been tough.

"Obviously there was a lot of reports and big analysis because we wanted to be in a different place," he told reporters in Bahrain today. "So the last couple of weeks have been very intense.

"I think we have some answers," he continued, "but as always you never get all the answers because you never get the chance to go back and repeat.

"Things move on, and we're here now in Bahrain on a different track but I think we learned some stuff about the car and ourselves that should help us to be more competitive here.

"We are not in a position to be making promises," he admitted, "the truth is we need to wait and see. It's easy to quantify how slow we were in qualifying and to quantify how much slower we were in the race. There are some numbers that we can, with confidence, say that we should have been better or would have been better if we go back and repeat, but it's all theory so we need to prove it on track."

Despite the shock of Melbourne, Vettel insists his faith in Ferrari is as strong as ever.

"Last year, in the second half of the season, when things went against what we hoped I still think there were plenty of positives," he said, "we built a very strong car and were able to develop that car until the summer break. Then we started to get a bit wobbly in understanding what was right with the car, we developed in the wrong direction and by the time we got it back there were three or four races that were crucial and we lost too much. Overall, there were positives.

"I think it is specific to motorsport and Formula 1 especially, that if you win everything is fine," he continued, "but if you come second it must have been horrible. I don't think so as we still had highlights from last year with plenty of positives and made a good effort to finish second."