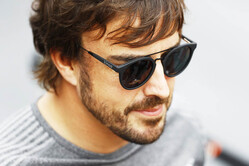 Publicising a forthcoming podcast which features former Ferrari president, Luca di Montezemolo, talking about Alonso's time with the Maranello outfit, the official F1 twitter account tweeted the following comment from the Italian: "When he wins, he's happy. When he doesn't win, it's the problem of the team…"

"On this week's Beyond The Grid, former Ferrari President Luca di Montezemolo discusses why he thinks Fernando Alonso didn't win a world title in red," the tweet concludes.

This evening, Alonso reacted, tweeting: "It had to be a reason not to follow this account until now.

"Today you remind me again!! President never said that. Specially after scoring 80% of the points for our team. We race hard, together, with all our heart and we fought until last race for championships." Along with several 'face with tears of joy' emoticons, the Spaniard also posted a raised fist.

"He's less close to the team than Michael and Niki, particularly in the difficult moments," the official F1 site quote Montezemolo as saying of Alonso, who spent five seasons at Maranello, finishing runner-up in the championship three times. "To be close to the team in the good moments is easy.

"In terms of performance, Fernando was very good," adds Montezemolo. "For me, Alonso is with Hamilton and Vettel and in the race, he's very close to Michael. In the race, Alonso was and is a fantastic driver. He lost the championship (in 2010 and 2012) not for his mistakes.

"If he won one championship, today we are talking about something different. We are talking that Alonso, despite many years he didn't have the best car, he was able to win the championship. Alonso is very strong."

Joining Ferrari from Renault where he had spent two difficult seasons following his nightmare year with McLaren alongside Hamilton, Alonso returned to Woking as the team anticipated a new chapter in its history as it also re-united with Honda.

Despite Alonso's reaction to the tweet, the fact is that throughout the paddock the Spaniard is seen as carrying too much 'baggage', which is why none of the big teams was willing to take him when it was clear his time with McLaren was coming to an end.