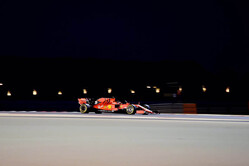 Ahead of today's second session the air temperature is 24.9 degrees C, while the track temperature is 31.7 degrees, that's a drop of almost 20 degrees on this afternoon.

While this morning's session was somewhat unrepresentative bring that it took place several hours before the time of day when qualifying and the race get underway, it did provide some entertainment.

First off, there was a Ferrari 1-2, with newcomer Charles Leclerc showing his ultra-experienced teammate the way home. Then there was Lewis Hamilton pushing just a little too hard, and looking a little scrappy, as he tried to match the pace of his teammate.

Throw in some yellow flags, Raikkonen losing his patience - sort of - with a couple of drivers who appeared not to see him, and Hulkenberg and Giovinazzi indulging in some synchronised off-road stuff, and you have the perfect start to the weekend.

While FP1 took place in daylight, dusk approaches and as the lights green to signal the start of the session the circuit lighting now illuminates the track.

Despite the session being 'go', there is no immediate desire to get to work.

Five minutes in and Ricciardo is first out.

As the Australian begins his first flying lap, Vettel heads out, followed by Raikkonen. The Finn spinning just two corners into his out lap.

Magnussen complains that his dash lights are too bright. Despite that, the Dane goers third (3.790), ahead of Kyat and Raikkonen.

Gasly posts 30.707 to go third as Verstappen and the Mercedes duo head out.

Despite a tow from a Haas, Verstappen can only manage second (30.295), the Red Bull driver quickest in S2.

Following a cool down lap, Hamilton ups the pace, going quickest in S1. He loses ground in S2 and even more in S3, but nonetheless improves to third (30.274).

In no time at all, the usual order is established, with Mercedes, Ferrari and Red Bull dominating, behind it's: Sainz, Magnussen, Hulkenberg and Norris.

In the Racing Point garage, mechanics are swarming over Perez' car, which appears to have a brake issue.

Vettel heads out for what is likely to be the start of the qualifying sims.

Unsurprisingly, the German goes quickest in S1, maintaining the pace in S2.

On their second hot lap both the Ferrari drivers lose a heap of time, their tyres clearly shot.

Next up is Bottas, followed, shortly after, by his Mercedes teammate.

As the Finn begins his first flying lap, the two Ferraris head out again, just in time for Bottas to see them as he sweeps by.

Indeed, a poor opening sector sees Bottas abort his lap, while Hamilton posts a PB in S1. The Briton maintain his pace in S2, but is only able to manage third, 0.507s off Vettel's pace.

Like his teammate, Bottas posts a string of PBs, but is unable to improve on 29.557 which puts him fourth.

Hulkenberg goes fifth with a 29.669, ahead of Verstappen who has a very scrappy lap.

"I am really slow on the straight," claims a frustrated Verstappen. "We're looking into it," he is told.

While Perez' problem was clearly resolved, now it appears Stroll has an issue, his crew all over the car which has its floor off. This comes on the back of his off this morning, which necessitated a change of floor.

Magnussen looked all set to improve again, posting a PB in S1, but by the end of S2 his tyres had given up the ghost.

Talking of Haas, Grosjean is currently ninth, 1.222s off Vettel's pace. He and teammate Magnussen are split by Norris.

Vettel looks set to improve, which he does, posting 28.846, but a mistake which sees him run wide in the final corner, prevents him going even quicker. Leclerc also improves (28.881), but remains second.

Problems for Alfa, which has both of its cars on their stands, neither driver to be seen.

Alfa reveals that both cars have suffered water leaks.

Replay shows Hamilton almost collect Kvyat at T1, the Briton not appearing to notice the Russian as he left the pits. "What was that behind me, I nearly got torpedoed," he says. Very droll Lewis, very droll.

Out come the yellows as Vettel spins at T2. Replay doesn't shed any light on what exactly went wrong. The German pits, which ruins his race sim. That's the third spin at that corner today.

With 14 minutes remaining, all bar Perez and the Alfas are on track.

"I think there's a misfire or something, low revs in the corners," says Norris. The Briton is told to "bring the car back".

With six minutes remaining, Giovinazzi is back on track.

The Ferraris showing good pace on the long runs, while Bottas and Verstappen appear to have the edge on Hamilton.

AS in FP1, the Ferraris dominate, and while Hamilton has managed to reverse the order at Mercedes, Red Bull must be concerned to see Verstappen behind Hulkenberg and Gasly down in twelfth.

Another strong session from Haas, with McLaren and Toro Rosso also in the mix.

Indeed, ignoring the top six, the next five drivers are covered by just 0.192s, indeed, the next ten are covered just around a second.