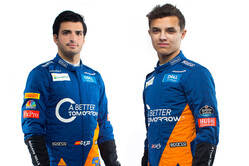 Carlos Sainz: "I can't wait to get back on track in Bahrain. After a detailed review of the Australian Grand Prix we've seen promising areas of performance in the car and I feel confident with our work during the whole weekend. Obviously, I wasn't happy with the unfortunate result in qualifying and the retirement in the race, but that's in the past. Once analysed, my only focus is the next race.

"Bahrain will be a fresh start and another chance to try to maximise our results on track. The schedule in Bahrain is different to other grands prix due to the late start of the sessions but I quite like it for a change and it makes this venue unique. Racing under the floodlights is always an interesting experience and I look forward to a positive weekend."

Lando Norris: "Melbourne was a mixed weekend for me, qualifying went well and I was pleased with my performance there, however Sunday didn't go as I'd planned. We weren't able to take advantage of the opportunity for points, however my debut grand prix was a great experience. I learned a lot and it was good to complete a full race distance for the first time. I'm looking forward to taking what I've learned from Melbourne and applying it in my approach to preparation for Bahrain.

"Bahrain is a track with good memories for me after my pole and win there in Formula 2 last year and I'm excited to race under the lights for the first time!"

"Bahrain is a very different circuit from Australia, which undoubtedly will challenge the car in different ways. Having said that, we'll try to capitalise on the many positive learnings from Australia. At this point in the season we've only visited two tracks, so it remains difficult to predict how well suited we will be to this circuit. Nevertheless, we do expect the close battles we had at the first race to continue.

"Carlos and Lando have shown to have integrated well into the team. We continue to focus our minds on two areas; achieving incremental gains that will have a steady impact on our results throughout the season, and executing the whole race weekend well."

Changes to the track:

The biggest change came in 2014, when the start time of the race was moved from 14:00 to 18:00. Since then, the Bahrain Grand Prix has been a night race, taking place under the most powerful stadium lights in the world.

The track layout remains unchanged from its original design in 2004, although there was an exception in 2010 when the race was staged on Bahrain International Circuit's endurance layout, which was 0.8km (0.5 miles) longer than the standard circuit.