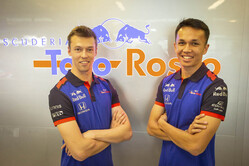 Alexander Albon: "Generally, I was happy with how the weekend went in Australia, although I felt a bit on the back foot going into the free practice sessions. Qualifying went well, that's also why I was a bit disappointed not to finish in the points, but Melbourne went well enough for me to be looking forward to the next race in Bahrain in a positive frame of mind.

"I learned a lot and feel better prepared. I found the scheduling pretty intense over my first F1 weekend, with interviews, media sessions and I wasn't expecting how much engagement there would be with the fans. It was a major hike up from Formula 2. The actual driving the car part felt familiar to me and once I had my helmet on, it was very simple and straightforward. During the sessions when I was driving, was when I felt most at home, as I could focus just on driving the car.

"I've raced in Bahrain in Formula 2, so at least I've done some laps on the track and I know which way the corners go. I was quite competitive there last year. I wouldn't say it's a fun track but it's still cool to drive. With the long straights, it means that every corner counts, a bit like Monza, and it's not the type of circuit where you can easily get into a nice rhythm. Also, Bahrain is a more normal sort of race track, less bumpy than Melbourne.

"I expect the whole weekend will feel a little bit easier for me, partly because I know the track and partly because I have Australia under my belt, so even though I'm not going to say I'll feel like a veteran F1 driver there, it should be a more straightforward weekend in terms of knowing what to expect."

Daniil Kvyat: "The way things went in Australia meant it was a very good way to start the season. It was a real confidence boost for the team because the indications are that we are in the mix with everyone. It puts us all in a positive frame of mind as we go to the next race in Bahrain. It's clear we can fight with others, with the teams around us in the midfield, which is very promising.

"We have to keep working hard on developing our package and improving our understanding of the car. I also have to work hard with my engineering crew, to ensure we extract everything out of the car in every session we have on track and we can see where that takes us in Bahrain.

"In Australia, I was impressed with the way the team worked operationally with everyone, as the mechanics and engineers all played their part. It's good to see this spirit in the team and we need to continue with this approach in the coming races.

"I've not had any particularly great results in Bahrain in the past, but the track is interesting and nice to drive. It's a very different circuit to Albert Park, it's a real race track and therefore it will be a very good test for us to see how the car works there.

"Bahrain is more similar to many other tracks on the calendar than Albert Park, so we should get a slightly clearer idea of where we are and how good our car is.

"The temperatures will be higher than in Melbourne, so again it will be more representative of the tyre conditions we will encounter during the major part of the season."